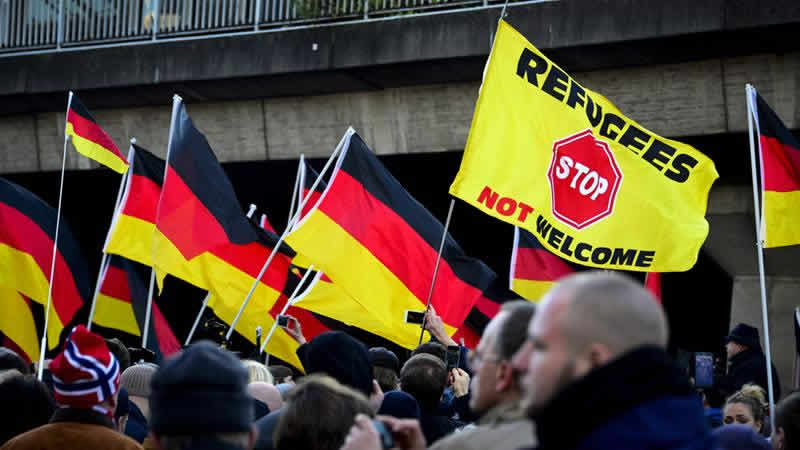 More than 2,500 refugees in Germany were attacked last year, according to a report by the interior ministry, raising fears over the safety of those who have fled war and persecution.

In a statement on Sunday, the interior minister citing police figures said that Germany recorded more than 3,500 attacks in total against refugees, migrants and their shelters last year, amounting to nearly 10 acts of anti-migrant violence a day. The attacks left at least 560 people injured, including 43 children. People who have fled their home country and seek protection in Germany have the right to expect safe shelter,” the interior ministry said, according to the AFP news agency. In one case, a German neo-Nazi was sentenced to eight years in jail in February for burning down a sports hall set to house refugees, causing damage worth $3.7m.

In another example that shocked the country one year ago, a crowd of onlookers cheered and applauded as an asylum shelter went up in flames in the country’s former communist east. Ulla Jelpke, an MP for the socialist Die Linke party, blamed anti-migrant violence on proponents of the country’s far-right and urged the government to take stronger action. We’re seeing nearly 10 [criminal] acts a day,” she told the Funke Mediengruppe, a German regional newspaper group. “Do people have to die before the rightwing violence is considered a central domestic security problem and makes it to the top of the national policy agenda?”

There were 988 attacks including arson on shelters for refugees and asylum seekers, a similar number to last year. In 2014, there were only 199 such cases. The sharp rise in hate crimes came after Germany, which hosts the largest refugee population in Europe, took 890,000 asylum seekers in 2015 at the height of Europe’s refugee crisis. Chancellor Angela Merkel’s decision to welcome refugees polarised the country and fuelled support for far-right Alternative for Germany (AfD) party. The number of arrivals fell sharply in 2016 to 280,000, mainly due to border closures on the Balkan overland route and an EU deal with Turkey to stem the flow.

PPP Awaits Panama Case Verdict Before Rolling Out Next Strategy

PPP Awaits Panama Case Verdict Before Rolling Out Next Strategy