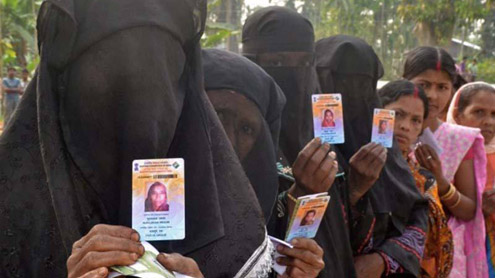 Even before the parliamentary races began, the Bharatiya Janata Party (BJP) had announced its electoral strategy of uniting the Hindus and dividing the Muslims to win seats. Now The Hindustan Times Correspondent in Lucknow Sunita Aaron says in an analysis published on Sunday that the maulanas have had their share of spreading confusion among the Muslims in Uttar Pradesh and elsewhere, and this will inevitably help the BJP in the elections. Have the religious clerics bargained a quid pro quo? In 2008, says Aaron, one of the world’s biggest and influential Islamic seminaries, Darul Uloom Deoband, which doesn’t entertain politicians, issued a fatwa that said India is a democratic and secular country, whose electoral politics can’t be assessed on the basis of Islamic scriptures. “This method would bring nothing except disturbance and confusion.

However, one should vote for parties and leaders best suited for both Muslims and the country,” the fatwa said, in reply to questions ranging from whether one should vote for a criminal politician to whether a Muslim loses his faith if he votes for BJP. Clerics at Lucknow’s Darul Uloom Nadwatul Ulama, another internationally renowned center of Islamic studies which receives politicians of all hues without rallying behind them, has also resisted voicing partisan opinions about elections. Compared to the seemingly neutral position of these seminaries, Shahi Imam of Delhi’s Jama Masjid Syed Ahmed Bukhari recently urged Muslims to vote for the Congress, saying it will “strengthen secularism”. He also expressed support for Mamata Banerjee and Congress’ ally Lalu Prasad.

Syed’s brother Yahya Bukhari, on the other hand, described Congress as a “hidden enemy” under whose rule Muslims had to suffer several riots. Influential Shia cleric Kalbe Jawad declared a vote for the Congress meant “betraying Islam”. Many Muslims feel that by endorsing parties, often invoking religion, mullahs are not only dividing the community but helping the politicians they intend to fight. Prof Rizwan Husain, an academic based in Aligarh, after casting his vote posted on his Facebook account: “As theologians, mullahs should not become political educators. We urge them not to confuse Muslim masses with their political fatwas. Auctioning, bartering and selling Muslim vote for personal gain is not an act of piety.”

The academic’s remarks that such fatwas end up confusing voters appear apt, as reports coming out of communally polarised west UP confirm the divergent statements by Muslim clerics ahead of the polls divided Muslim voters sharply, rather than uniting them as a bloc that votes tactically. “Najma and I have just returned after casting our votes. It feels as if it is a referendum vote on ‘Modi sarkar’. The Muslim vote, however, seems divided because of varying endorsements of candidates by Shia and Sunni clerics,” said another Facebook post. Dr Mustafa Kamal Sherwani, head of the department of law at Shia College in Lucknow, too blames maulanas for the division of Muslim votes in the first phase of Lok Sabha election in UP.

He said many of his Hindu friends had told him BJP prime ministerial candidate Narendra Modi’s rise had been helped by “unwarranted reactions of maulanas”. Although Muslims have a strong presence only in 46 of 545 seats in Parliament, they can influence the outcome of elections in more seats. They have often been derided by right wing political formations as a vote bank used by Congress and other secular parties. Much has changed since the 1990s when both Kanshi Ram and Mulayam Singh Yadav publicly snubbed the senior Shahi Imam, Abdullah Bukhari, telling him not to meddle in politics.

Thereafter, both enjoyed love and hate relationship with his son Ahmed Bukhari. Most political parties have been seen cosying up to Muslim religious personalities. Senior lawyer and Uttar Pradesh additional advocate general Zafaryab Jilani believes there is no harm in maulanas guiding Muslim voters. “This is not the first time they have supported a particular party. They have been doing it in every election,” he said. In fact, Jilani said that till 2004, Milli Council, a Muslim organisation, used to conduct a survey of constituencies to assess the winning candidate and guide voters accordingly. The exercise was stopped after BJP’s decline, he added. -Dawn