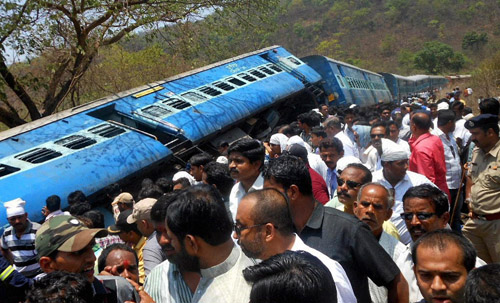 The train’s engine and four of its carriages jumped the tracks in Raigad district in the western state of Maharashtra, according to police control room official, Ramchandra Kamre. Police in Raigad said on Sunday night that 19 people had been killed and 132 injured.

Railways minister, Mallikarjun Kharge, has ordered an investigation into the accident, which occurred on Sunday morning as the train was travelling from Diwa on the outskirts of Mumbai to the city of Sawantwadi in Maharashtra. Rescue workers have been trying to pull out passengers still trapped in overturned carriages, with cranes and teams of workers at the site.

India’s underfunded rail network has a poor safety record but remains the main form of long-distance travel in the country despite fierce competition from private airlines. The country’s worst rail accident was in 1981 when a train plunged into a river in the eastern state of Bihar, killing an estimated 800 people. -abc.net