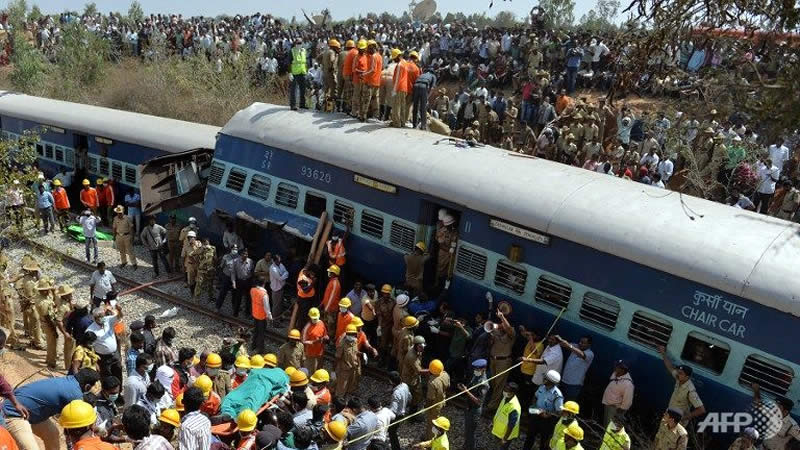 A passenger train derailed in southern India on Friday after a boulder fell on the tracks, killing at least ten people with more bodies still trapped in the wreckage, officials said.

Scores of passengers were also injured in the crash that occurred Friday morning near Anekal, about 40 kilometres (25 miles) from the southern city of Bangalore. Federal Railway Minister Suresh Prabhu said some carriages were derailed after a boulder fell on the tracks as the inter-city express train was travelling from Bangalore to southern Ernakulam. “Total deaths are 10,” senior Bangalore railways officer Rajiv Pratap Sharma said.

Law Minister Sadananda Gowda, who rushed to the accident site early Friday, said “some dead bodies are still inside”, indicating that the death toll could rise. TV footage showed rescue workers using metal cutters and other equipment to retrieve those trapped, while others were clearing the site and repairing the damaged tracks. Prime Minister Narendra Modi expressed his sadness at the loss of life and conveyed his “condolences to the families of the deceased” on Twitter.

Deadly accidents are common on India’s railways, whose vast and rundown network carries tens of millions of people daily. In August, an express train ploughed into a packed rickshaw in northern Bihar state, killing 20 people, some of them children.  (AFP)

Thousands Attend Funerals of Muslim ‘Hate Crime’ Victims in US