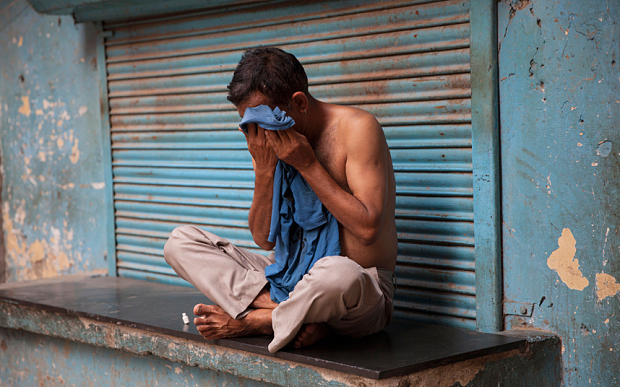 Officials warned the toll was almost certain to rise, with figures still being collected in some parts of the hard-hit Telangana state in the south of the country, and with no end in sight to the searing conditions. Large parts of India, including national capital New Delhi, have endured days of sweltering heat, prompting fears of power cuts. But the highest temperatures have been recorded in Telangana and neighbouring Andhra Pradesh state. Andhra Pradesh authorities are urging labourers and others not to work long hours in the heat of the day after 246 people died from the high temperatures there in the last week. “The majority of the victims are people who have been exposed to the sun directly, usually aged 50 and above and from the working classes,” P. Tulsi Rani, special commissioner of Andhra Pradesh’s disaster management department, told AFP.

Rani said although the deaths started occurring on Monday last week, the number of cases snowballed towards the end of the week after days of scorching heat. “We are asking them to take precautions like using an umbrella, using a cap, taking a huge quantity of liquids like water and buttermilk, and wearing cotton clothing,” he said. Another 188 people have died in Telangana, mostly since the middle of last week, although numbers were still being confirmed and were highly likely to rise, D. Vani, an official with the state’s disaster management department, told AFP.

Hundreds of people, mostly from poorer sections of society, die at the height of summer every year across the country, while tens of thousands suffer power cuts from an overburdened electricity grid. “The kind of heatwave we are seeing now is slightly higher than normal. The temperatures here have almost touched 48-49 degrees Celsius (118-120 degrees Fahrenheit),” said B. R. Meena, principal secretary of revenue for Telangana. Several deaths have also been reported in the northwestern desert state of Rajasthan in recent days including a woman who collapsed and died on the roadside in Bundi city, the Press Trust of India said.

In the eastern city of Kolkata, taxi unions have urged drivers to stay off the roads between 11am and 4pm because of the heat. India’s weather bureau warned that “heatwave to severe heatwave conditions would prevail” in Andhra Pradesh and Telangana in coming days as well as in the northern states and New Delhi. – AFP