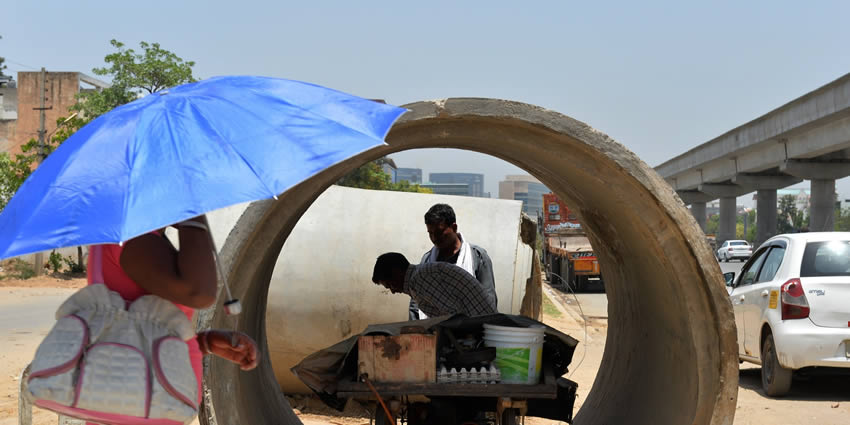 More than 1,100 people have died in a major heatwave sweeping India, authorities said Wednesday, as forecasters warned searing temperatures would continue. Southern India has borne the brunt of the hot, dry conditions and many of the victims are construction workers, elderly or homeless people unable to heed official advice to stay indoors.


Roads have melted in New Delhi, where forecasters said they expected the high temperatures to continue into next week, adding to the misery of thousands living on the capital’s streets with little shelter from the hot sun. Brahma Prakash Yadav, director of Indian Meteorological Department, said top temperatures in the capital would remain around 45 degrees Celsius (113 Fahrenheit), the national benchmark for a heatwave.

“Maximum temperatures won’t fall substantially. However, major relief can be expected from June 2 as there are indications of good showers,” he said. Hospitals in the worst-affected states were on alert to treat victims of heatstroke and authorities advised people to stay indoors and drink plenty of water.

Hundreds of people, mainly from the poorest sections of society, die at the height of summer every year across the country, while tens of thousands suffer power cuts from an overburdened electricity grid. Authorities in the worst-hit state of Andhra Pradesh in southern India, where nearly 900 people have died since May 18, called for emergency water distribution areas to be set up.

However, P. Tulsi Rani, special commissioner for disaster management in the state, said meteorologists were forecasting a dip in temperatures in the coming days. In the neighbouring state of Telangana, where temperatures hit 48 degrees Celsius over the weekend, more than 200 people have died in the last week.

Eleven people were confirmed to have died in the western state of Orissa and another 13 succumbed to the heat in the eastern state of West Bengal, where unions urged drivers to stay off the roads during the day. Residents of Gurgaon, a high-rise satellite city that is home to many of the city’s workers, suffered power cuts of up to 10 hours a day as the electricity grid struggled to cope with the demand from millions of air conditioners. India’s power industry has long struggled to meet rapidly rising demand in Asia’s third largest economy, with poorly maintained transmission lines and overloaded grids. The Hindustan Times warned that some of the hot, dry conditions could plunge the worst-affected states into drought before monsoon rains arrive.

The monsoon is forecast to hit the southern state of Kerala towards the end of this month before sweeping across the country, but it will be weeks before the rains reach the arid plains. – Dawn