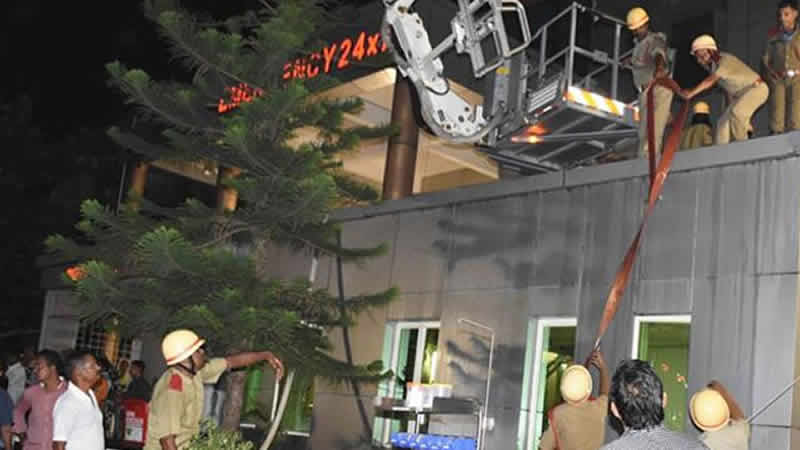 At least 19 people were killed Monday when a fire broke out at a leading private hospital in an eastern Indian city, police said, with officials warning the death toll could rise.

More than 40 critically ill patients were trapped in an intensive care ward by the blaze, which is believed to have been triggered by an electric short circuit on the second floor of the SUM hospital building in Bhubaneswar, the capital of coastal Odisha state. “We can confirm 19 deaths in the incident,” Bhubaneswar police commissioner Yogesh Khurania told AFP. More than 100 patients have been shifted to other hospitals. Many of them are critical and the death toll may rise further,” he said. Khurania said initial reports suggested that most of the victims had died due to smoke inhalation, with toxic smoke filling the entire floor of the building and hampering rescue efforts.

Local television stations showed images of fire fighters wearing masks smashing glass panes to enter the building as they struggled to save patients from suffocating at the 1000-bed hospital. Sharat Kumar Sahu, a police officer at the site of the blaze, told AFP that the fire started in the dialysis ward in the four story building and quickly spread to the intensive care unit. Most of the critical patients were on ventilators and died in the blaze, he said. Sahu added that more than 100 fire fighters had battled the fire  which started at around 7:30 pm (1400 GMT)  for some five hours until it was brought under control.  Read More: Another Indian Army Camp ‘Attacked’ In Occupied Kashmir

Prime Minister Narendra Modi said on Twitter it was a “mind-numbing” tragedy, expressing his grief over the loss of life and promising to help the injured. More than 90 patients were killed at a private hospital in eastern Kolkata city in 2011 after a fire raged through the premier hospital, trapping many patients inside the building. Most of the victims died due to inhaling toxic gases, autopsy reports later revealed. Sixteen officials from the AMRI hospital are facing trial in court on charges of culpable homicide, violating safety rules and negligence.

Deeply anguished by the loss of lives in the hospital fire in Odisha. The tragedy is mind-numbing. My thoughts are with bereaved families.