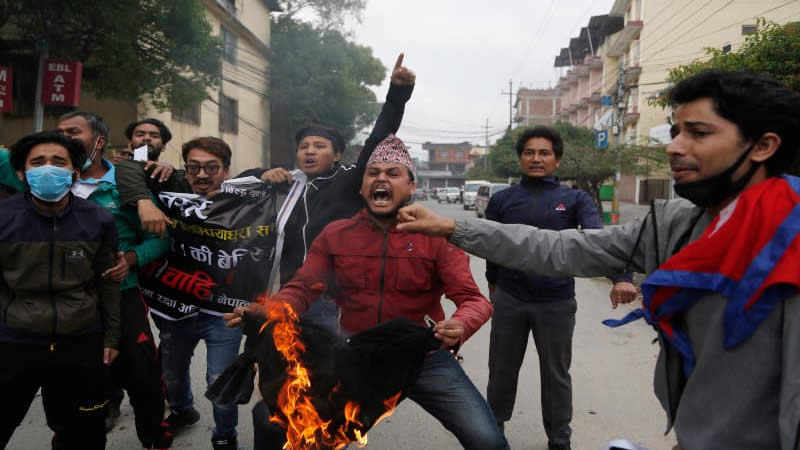 Nepal has protested to India over a border road, which it claims traverses its territory, a charge New Delhi has denied, The Wire news portal said on Saturday. It said the protest also flowed from a new map of the region India drew after the bifurcation of occupied Jammu and Kashmir into two union territories in December last year.

“Rumblings in Nepal about the boundary with India have now resulted in a full-scale eruption since India inaugurated a new road in Uttarakhand which leads to territory that is claimed by Kathmandu, near the border with China,” The Wire said.

On Friday, Defence Minister Rajnath Singh inaugurated by videoconference the road between Dharchula and Lipu Lekh, which will reduce the length of the Hindu pilgrimage of Kailash Mansarovar Yatra inside China by several days.

Nepalese opposition leaders immediately raised the pitch, asking for the government to clear its public stance. A day later, Nepal’s foreign ministry expressed “regret” at India’s “unilateral act” and called upon India to refrain from carrying out any activity on Nepalese territory, portal said.

In a lengthy statement, Nepal’s foreign ministry reminded that Nepal claims all territories east of Mahakali river, “including Limpiyadhura, Kalapani and Lipu Lekh” as per the 1816 Sugauli Treaty”.

“This was reiterated by the Government of Nepal several times in the past and most recently through a diplomatic note addressed to the Government of India dated 20 November 2019 in response to the new political map issued by the latter,” the statement said.

“The context of the last diplomatic note is that months ago, India had issued a new political map to show the bifurcation of Jammu and Kashmir into two new Union Territories. In it, it depicted Kalapani as part of Indian territory, which led to a strong objection from Nepal,” The Wire said.

It further pointed out that when India and China had agreed to include Lipu Lekh pass as a bilateral trade route in a May 2015 joint statement, Nepal had issued separate diplomatic protest notes to the two Asian giants for not obtaining Kathmandu’s consent.

On the latest move, Nepal stated: “This unilateral act runs against the understanding reached between the two countries including at the level of prime ministers that a solution to boundary issues would be sought through negotiation.”

Stating that Nepal sought a diplomatic solution in the spirit of friendly relations, its foreign ministry asserted: “In light of this development, the Government of Nepal calls upon the Government of India to refrain from carrying out any activity inside the territory of Nepal.”

The statement issued in Kathmandu also reiterated that Nepal had twice proposed dates for holding meeting between the foreign secretaries of the two sides after the Kalapani controversy gathered momentum last year.

Nepal’s Foreign Minister Pradeep Gyawali had told visiting Indian journalists in February that if India could solve longstanding and complex boundary disputes with Bangladesh, then it should be able to do so with Nepal. He had also highlighted that India had still not given a concrete response for a meeting of the two foreign secretaries.

On Friday evening, India’s Ministry of External Affairs responded that the road section “lies entirely within the territory of India”. “Under the present project, the same road has been made pliable for the ease and convenience of pilgrims, locals and traders,” The Wire quoted MEA spokesperson Anurag Srivastava as saying.

He added that both countries had an established mechanism on boundary matters and that the delineation of the boundary was still an “ongoing process”. “India is committed to resolving outstanding boundary issues through diplomatic dialogue and in the spirit of our close and friendly bilateral relations with Nepal,” said Srivastava.

On the demand for a meeting of foreign secretaries, he said that the meeting would be held “once the dates are finalised between the two sides after the two societies and governments have successfully dealt with the challenge of Covid-19 emergency”.