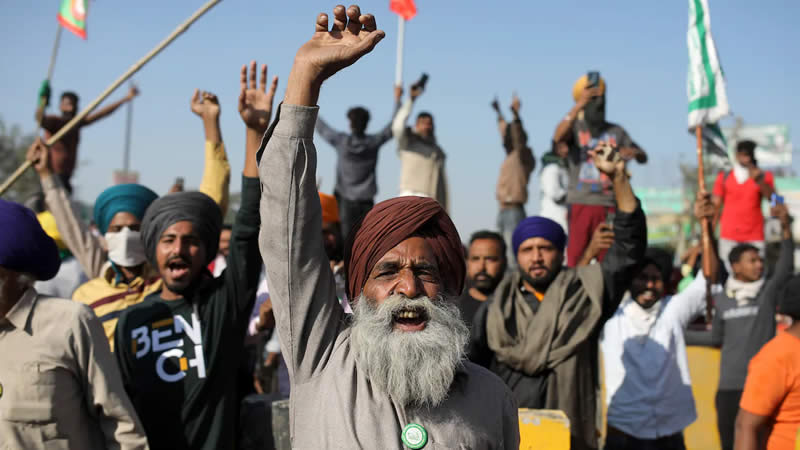 The farmers were supported in the protest on Tuesday by railway workers, truck drivers, teachers and other unions

Railway tracks and highways were blocked across India as farmers launched a national day of action Tuesday against reforms deregulating the agriculture sector, upping the stakes after 10 days blockading the capital.

Tens of thousands of farmers have set up barricades on roads into New Delhi since November 26, vowing not to move until the laws are repealed in one of the biggest challenges to the Hindu nationalist government since it was re-elected in a landslide in 2019.

“We are worried, extremely worried. Our children will starve, what could be a bigger worry than this?,” farmer Ved Singh told AFP ahead of the strike, echoing fears of his peers that large corporations would lower prices and destroy their livelihoods.

“There would be nothing to eat… How will we earn money? This is the biggest worry for us.”

Authorities put on extra police in Delhi and boosted security in the rest of the country in a bid to head off any trouble.

The farmers were supported in their call for action on Tuesday by railway workers, truck drivers, teachers and other unions.

“We want to support the farmers’ cause,” a senior leader from the Communist Party of India told AFP in eastern West Bengal state.

The blockade and strike have taken on a political dimension with the national ruling Bharatiya Janata Party accusing opposition parties of opportunism by rejecting measures they had called for when in power.

Delhi Chief Minister Arvind Kejriwal’s Common Man Party said he had been placed “under house arrest” since Monday by Delhi Police, which is controlled by the national government, after he visited the farmers’ blockade site. Police denied the claim.

Footage posted on Twitter showed an opposition Congress leader in western Gujarat state riding a scooter being chased by a police vehicle as he sought to join the strike.

Five rounds of talks have failed to narrow differences between farmers and ministers.

The laws will allow farmers to sell their produce on the open market — including to supermarket chains — instead of through state-run organisations that guarantee a minimum price.

Farmers say the industry will be taken over by major firms that will force prices down.

“If the law continues in future, the farmers will be reduced to labourers and only become workers for big companies.”

But the government insists the changes are necessary to give agriculture — still the backbone of the Indian economy — a long-term future.

“We cannot build the next century with the laws of the previous century,” he added, in remarks seen as alluding to the protests.

The blockade has already caused fruit and vegetables prices in Delhi to rise over restricted supplies.

The farmers are strongest in the north, but even the government in the southern Karnataka state suspended online school lessons for the day to show support.

Top athletes including wrestler Kartar Singh, who has won gold medals at the Asian Games, said they would return national awards in protest at the laws.

Singh, alongside hockey player Gurmail Singh — gold medallist at the 1980 Moscow Olympics — and former women’s hockey captain Rajbir Kaur tried to march on the presidential palace Monday to return their awards but were stopped by police.

Fresh talks on the reforms will be held Wednesday.

Pakistan to Procure COVID-19 Vaccine in First Quarter of 2021