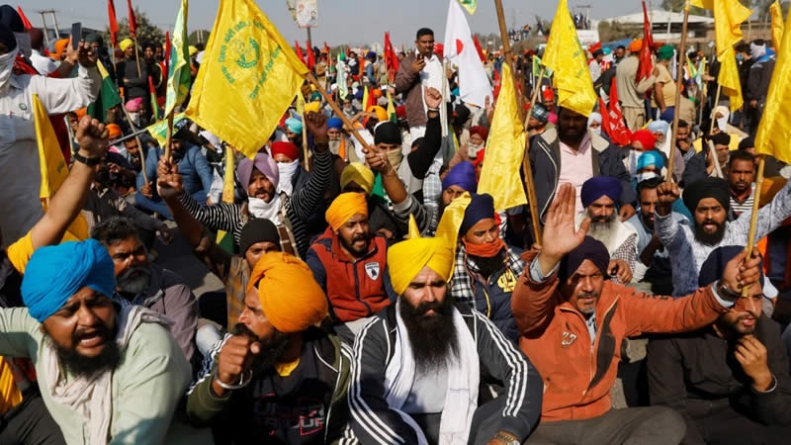 Thousands of Indian farmers protesting against agricultural reforms breached barricades on Tuesday to enter the historic Red Fort complex in the capital and hoist flags after clashing with police, who fired tear gas to scatter them.

Growers, angered by laws they say help large, private buyers at the expense of producers, have camped outside New Delhi for almost two months, posing one of the biggest challenges to Prime Minister Narendra Modi since he came to power in 2014.

The body of one protester draped in an Indian tricolour lay in a central Delhi street after the tractor he rode overturned in one of the clashes, said a witness, Vishu Arora.

“He died right there,” Arora added.

A Reuters witness saw at least five police and three protesters injured at the Red Fort, from whose ramparts Modi delivers an annual speech. Some of those who scaled its walls carried ceremonial swords, overwhelming police who were trying to prevent them from entering.

The government ordered internet services in some parts of the capital to be blocked, according to mobile carrier Vodafone Idea, in an attempt to prevent further unrest.
Lost control

Tens of thousands of bearded and turbanned farmers, many bundled against the winter cold, began the day in a convoy of tractors festooned with Indian and union flags along the city’s fringes.

But hundreds of protesters soon broke away from pre-approved routes, heading for the city centre where the government was holding an annual Republic Day parade of troops and military hardware on Tuesday morning.

“Modi will hear us now, he will have to hear us now,” said Sukhdev Singh, 55, a farmer from the northern state of Punjab, who was among hundreds of protesters, some on horseback, who broke away from one of the three protest routes.

From the city’s north they headed towards the government buildings in the centre. They commandeered cranes and used ropes to tear down roadblocks, forcing constables in riot gear to give way, Reuters witnesses said.

A second group rode tractors to get to a key central traffic junction, also breaching barricades after similar clashes with police.

In a statement, Delhi police accused those who diverged from the agreed routes of “violence and destruction”.

“They have caused great damage to public property and many police personnel have also been injured,” the statement said.

Protest organiser Samyukt Kisan Morcha said the groups deviating from set routes did not represent the majority of farmers.

“We also condemn and regret the undesirable and unacceptable events that have taken place today and dissociate ourselves from those indulging in such acts,” the group of farm unions said in a statement.

Amarinder Singh, chief minister of Punjab state where many of the protesters came from, called the clashes “shocking”.

“The violence by some elements is unacceptable,” he said in a tweet. “It’ll negate goodwill generated by peacefully protesting farmers.”
Farmer pressure

Agriculture employs about half of India’s population of 1.3 billion, and unrest among an estimated 150 million landowning farmers worries the government.

Nine rounds of talks with farmers’ unions have failed to end the protests, as farm leaders rejected the government’s offer to delay the laws for 18 months, making a push for repeal instead.

The government says that the farmers have been manipulated by opposition parties which have largely backed the rural campaign.

“They have the resources to mobilise support, and to continue the protest for a long time. They have also been very successful in keeping the protest really focused.”
‘National embarrassment’

All over the city, security forces fired tear gas and staged baton charges.

But the farmers also laid into police with branches and metal bars and hijacked buses that had been used to block their convoys.

The government had opposed the rally saying it would be a “national embarrassment” on Republic Day. Police allowed the demonstration if farmers waited until after the military parade and kept to a route away from central Delhi.

But the security was breached while Modi and other dignitaries watched tanks and troops pass along the Rajpath boulevard while newly acquired Rafale fighter jets flew overhead.

Modi waved to crowds and was driven back to his residence barely 30 minutes before the fleets of tractors took over the centre.
Popular support

“We are going to show the government that we mean business,” said protester Nareesh Singh as he revved up his tractor and drove into a cloud of tear gas.

Farmers’ leaders say they have enough supplies to keep their protest camps going for a year. The leaders said the police had provoked the farmers into violence.

In a statement, police replied that they had to act after the farmers broke the conditions for the rally.

“When you attack a peaceful protest, then difficulties for the government will surely increase,” union leader Kawalpreet Singh Pannu told AFP.

“This won’t stop here. Our movement and message have only become stronger.”

He said a new protest would be held on February 1 outside parliament when the government announces its budget.

On one main road, people on rooftops threw petals on the tractor convoys.

India showcases its military hardware with a parade every year on Republic Day, which marks the adoption of its constitution in 1950.

This year’s ceremonies went ahead despite security concerns.

The parade was cut back because of the coronavirus pandemic, with the number of spectators reduced from 125,000 to 25,000.

Smaller farmer demonstrations were held in Mumbai and Bangalore and in the rural state of Haryana.

This author has not added a biography. Meanwhile Top has contributed 2693 posts. Click here to view them.