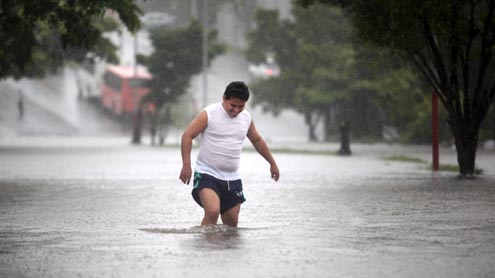 The U.S. National Hurricane Center predicted Raymond would take a sharp westward turn and head out to sea before reaching land, but warned that the Category 2 storm still might get as close as 50 miles (80 kilometers), bringing the threat of heavy and possibly dangerous rains. The center said the storm was expected to strengthen more over the next day. In a region where 10,000 people were still living away from their homes one month after Manuel caused widespread flooding and left landslide risks, officials hurried to get emergency teams in place and weighed possible further evacuations. Mexican authorities pinned their hopes on a cold front moving from the north that could help force Raymond to turn away from the coast, said the head of Mexico’s National Water Commission, David Korenfeld.

“The cold front coming down is what makes it (Raymond) turn to the left, but that is a model,” Korenfeld said. “If that cold front comes down more slowly, this tropical storm … can get closer to the coast.” Raymond’s center was about 125 miles (205 kilometers) south-southwest of the beach resort of Zihuatanejo and had maximum sustained winds of 100 mph (160 kph) late Sunday. The storm was moving north at about 6 mph (9 kph), the U.S. hurricane center said. It said some additional strengthening was expected overnight and the storm’s forward motion was forecast to slow. A hurricane warning was in effect from Tecpan de Galeana, up the coast from Acapulco, north to the port of Lazaro Cardenas. A tropical storm warning was posted from Acapulco to Tecpan.

Authorities in southern Guerrero state, where storm deluges caused about 120 deaths from flooding and landslides in September, were more worried about Raymond’s potential to bring heavy rains than its winds. The state government closed seaports, set up 700 emergency shelters and urged residents in risk areas to take precautions. Officials were expected to decide soon on whether to order more evacuations, including from low-lying areas of Acapulco that flooded during Manuel. The state cancelled classes in most coastal communities west of Acapulco, including Zihuatanejo. Schools are often used as emergency shelters in Mexico.

Forecasters said Raymond was expected to slowly approach the coast late Monday or early Tuesday but then begin to meander. They warned that heavy rainfall was possible along the coast in coming days and could cause life-threatening flash floods and mudslides. “There will be rain for the next 72 hours along the Pacific coast, very heavy rain, torrential rain,” Korenfeld said. The potential for damage from such rains is high. About 50 dams in the area were still over capacity, and officials were releasing water to make room for expected rainfall. Dozens of hillsides along the coast are thought to be unstable and could collapse from additional rain. In advance of the storm, the government moved helicopters and work crews to the places that problems were most likely. Some villages high in the mountains of Guerrero were still without electricity and phone service following Manuel.

About 5,000 people in Guerrero are still living in shelters after their homes were flooded, and another 5,000 who were evacuated from homes built on hillsides at risk ofmudslides are staying with relatives on safer ground. In Zihuatanejo, near the Ixtapa resort, authorities sent emergency personnel into low-lying areas to warn people to seek safer ground, said Miguel Quiroz, a local Red Cross dispatcher. In Barra de Potosi, a beach area just outside Zihuatanejo, a light rain began falling Sunday but tourists were largely undisturbed by the storm’s proximity. We’ve got bookings coming in, people are coming in,” said London native Les Johnson, an employee at the Our House bed and breakfast. “There’s people on the beach, it’s quite nice … there’s no problem at the moment.”- Yahoo

Membership of 70 lawmakers to be Suspended