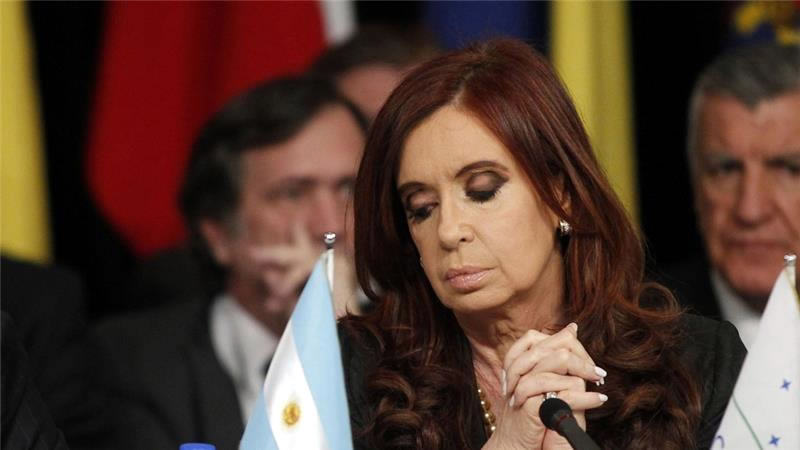 Argentina’s President Cristina Fernandez has announced plans to dissolve the country’s intelligence agency amid suspicions that rogue agents were behind the murky death of a state prosecutor investigating the 1994 bombing of a Jewish centre that killed 85 people and wounded 200 others. The death of Alberto Nisman this month, just before he was due to answer questions about his allegation that Fernandez conspired to derail his investigation, shone a spotlight on the powerful state spy apparatus which some analysts say operates with too much autonomy. The government said that Nisman’s allegations and demise were linked to a power struggle at the intelligence agency and agents who had recently been fired.

Fernandez said on Monday a draft bill on dissolving the intelligence agency “will be sent to congress before my trip to China this weekend”. Fernandez, who spoke from a wheel chair dressed all in white, has come under fire from political opponents and Argentines in cities across the country for her handling of the fallout from Nisman’s death. Nisman had accused Fernandez of secretly negotiating with Iran to avoid punishing those responsible.

A joint Argentina-Iran truth commission has been fiercely defended by Fernandez’s government as the best means of resolving a case that has moved forward only in fits and starts in Argentina’s judiciary and been frustrated all along the way by Iran’s refusal to cooperate. But the probe has not advanced and the victims’ relatives believe the agreement has protected the perpetrators. Mohsen Rabbani, Iran’s former cultural attache in Buenos Aires, and the Islamic republic’s former intelligence minister, Ali Fallahian, are among the suspects in the July 18, 1994, attack.

The prosecutor had tried for years to get Rabbani and other suspects extradited to face trial in Argentina. Thousands took to the streets last week to protest the slow pace of justice for the victims of the 1994 bombing and demanding answers to the questions around Nisman’s death.