The Drugs Seized From The Smugglers 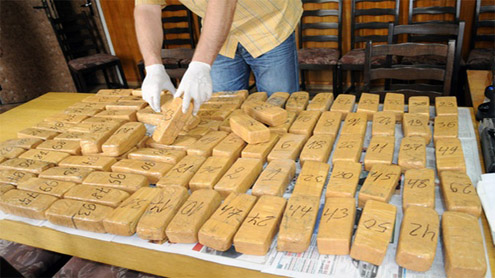 Drugs worth SR1bn seized; 875 heldSecurity forces have arrested 875 suspects, including 231 Saudi nationals and 644 foreigners of 34 nationalities, for alleged involvement in drug smuggling, trafficking and peddling in the past four months.

“The drugs seized from the smugglers are valued at more than SR1 billion,” said Maj. Gen. Mansour Al-Turki, Interior Ministry spokesman. He said the Kingdom’s drug enforcement agencies faced stiff resistance from the drug smugglers and traffickers. One policeman was killed and 13 security officers were injured during different operations. “Three smugglers died, while four others were injured during armed clashes with security forces,” the spokesman said.

Police seized 3.44 kg of heroin, 6.69 tons of hashish and 10.95 million pieces of amphetamine narcotic tablets, in addition to SR6.89 million in cash. Maj. Gen. Al-Turki said there was sound coordination between the Customs Department and security agencies in tracking down the smugglers and traffickers and that such efforts helped in foiling many drug-smuggling attempts. Last August, Al-Turki had announced that 991 drug-trafficking suspects were arrested over a period of five months.

The arrested suspects included 337 Saudi nationals and 654 foreigners. All those arrested were involved in trafficking narcotics in huge quantities with a market value exceeding SR2.5 billion, the spokesman said. “The Kingdom has identified drug trafficking as a top national security threat linked to militancy in the region and has put its powerful security organs in charge of fighting such a phenomenon,” Al-Turki told a news conference. “We are waging a war against a new form of terrorism, which is drug trafficking,” he added.