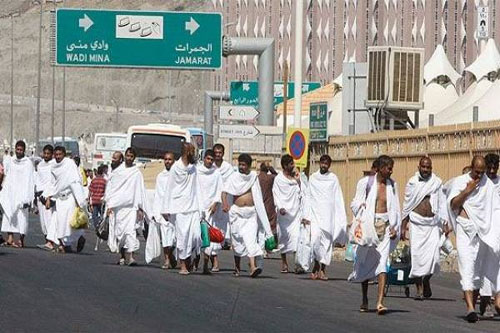 Nearly three million Muslims from across the world are in the holy land of Makkah for the observance of annual Hajj pilgrimage.

The pilgrims are heading towards Mina today (Thursday) in the first phase of hajj. Dressed in the simple white folds of cloth prescribed for hajj.

The pilgrims belonging to different countries and backgrounds will pass this day and the following night worshipping and begging for pardon to God in Mina — a Tent City situated roughly eight kilometers from Makkah. Later on Sunday, the main pillar of Hajj pilgrimage ‘Wuquf-e-Arafat’ will be observed.  Wuquf (Stay) in Arafat is performed from Zuhr to sunset on the 9th of Zil-Hajj of Islamic year. Imam of Nimra Mosque will deliver his sermon to Hajj pilgrims in Arafat and the pilgrims would offer Zohar and Asar prayers jointly at Arafat.

The main action in Wuquf is not to pray lots of Nafils but to just stand facing the Baitul Haram (Sacred House) asking Allah for forgiveness while recognizing Him as our Lord.

The holy Prophet (PBUH) said, “Al Hajju Arafah,” means ‘standing in Arafat’ is the Hajj. After the Wuquf-e-Arafat, the pilgrims would move towards Muzdalafa and there they would perform remaining two prayers, Maghrib and Isha, together. All Hajj pilgrims will stay whole night in Muzdalfa and continue worships for forgiveness and pleasing God, the almighty. They would perform Fajar prayer on morning of 10th Zil-Hajj in Muzdalfa and then return to Mina for following act of Hazrat Ibrahim (A.S), Rami, stoning the big Satan.

After stoning the Satan, Hajj pilgrims will shave off heads or trim hairs, to the prescribed level, and then would get off the Ahrams, Hajj cloths, at completion of Hajj rituals. Muslims celebrate Eid-ul-Adha and sacrifice Halal animals of their choices every year, after completion of Hajj proceedings. The Saudi rulers have completed the arrangements to provide the best facilities to the pilgrims.

Nearly 35,000 security staff will perform duties. Hajj is one of the five pillars of Islam that must be performed at least once in lifetime by all Muslims capable of making the expensive and difficult journey. It is religious obligation equally applicable to Sunni and Shi’ite Muslims. – Samaa

How Stress Affects Your Heart

How Stress Affects Your Heart