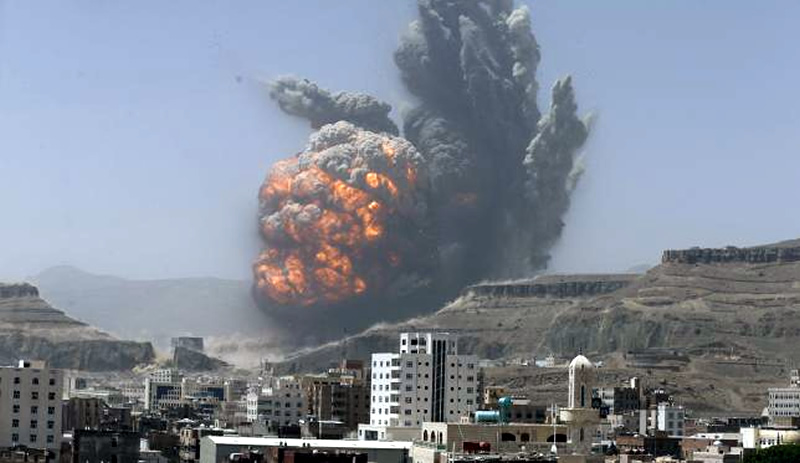 The Saudi-led coalition bombing Yemen has announced an end to its operation, a statement read out on Saudi-owned Arabiya TV said, adding that the campaign “successfully managed to thwart the threat on the security of the Kingdom of Saudi Arabia”.

According to the statement, the allied army has achieved its military goals in Yemen, and will now begin a new operation called “Restoring Hope.” Focus will now be shifted towards security, counter-terrorism, aid and a political solution in Yemen, according to the Saudi-owned TV channel. But the Saudi-led coalition will “continue to prevent Houthi militias from moving inside Yemen,” a Saudi military spokesman said. A statement issued by the Saudi defence ministry reads: “Since the beginning of the ‘Determination Storm’ operation, in which the Saudi Armed Forces distinguished themselves in battle efficiently and capably, resulting in imposing air control to prevent any hostility against (the Kingdom) and countries of the region, the Ministry of Defense announces that the airstrikes.

with participation of the Saudi brave hawks with brothers in the coalition countries, have successfully managed to thwart the threat on the security of the Kingdom of Saudi Arabia and neighboring countries through destruction of the heavy weapons and ballistic missiles seized by the Houthi militias and troops loyal to (Ali Abdullah Saleh), including bases and camps of the Yemeni army.” Earlier today, the Iranian deputy foreign minister had hinted at a ceasefire, signaling that diplomatic efforts may have been underway to stop almost a month of Saudi-led bombing of Yemen’s Houthi group. “We are optimistic that in the coming hours, after many efforts, we will see a halt to military attacks in Yemen,” Hossein Amir Abdollahian was quoted as saying by Iranian news agencies.

Almost a month ago, Saudi Arabia and four other Gulf states, including Bahrain, Kuwait, Qatar and the United Arab Emirates (UAE), had announced their decision to “answer the call of President Hadi to protect Yemen and his people from the aggression of the Houthi militia.” The Kingdom and its allies then launched air strikes in Yemen against Houthi fighters, who had tightened their grip in the southern city of Aden, where the country’s president had taken refuge. Following initiation of the Saudi-led offensive in Yemen, Pakistan was formally contacted by top Saudi officials, requesting it to join the Yemen operation. Prime Minister Nawaz Sharif has since held several meetings with top civil and military officials and has on several occasions said that a “threat to Saudi Arabia’s territorial integrity will evoke a strong response from Pakistan.”

But despite repeated statements in favour of Saudi Arabia’s stance, Pakistan did not officially commit its troops to the offensive in Yemen. To evolve consensus on the matter, a joint parliament session was summoned by the government to debate Pakistan’s role in Yemen. After days of discussion, Pakistan’s lawmakers opted for neutrality in the conflict.

NA-246 by-election: Mobile Phones Not to be Allowed Inside Polling Stations

NA-246 by-election: Mobile Phones Not to be Allowed Inside Polling Stations