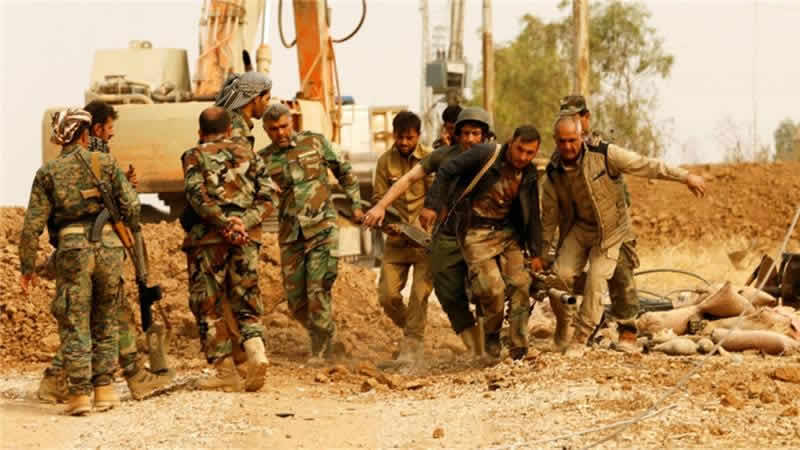 Iraqi forces inched to within striking distance of eastern Mosul on Tuesday as defence chiefs from the US-led coalition met in Paris to review the offensive on the Islamic State of Iraq and the Levant group’s bastion.

Forces from the elite counter-terrorism service (CTS) retook areas close to the eastern outskirts of Mosul, the last major urban stronghold of ISIL, also known as ISIS, in Iraq. “On our front, we have advanced to within five or six kilometres (three to four miles) of Mosul,” their commander, General Abdelghani al-Assadi, told the AFP news agency. We must now coordinate with forces on other fronts to launch a coordinated” attack on Mosul, he said, speaking from the Christian town of Bartalla. With the Mosul battle in its second week, French President Francois Hollande called for the coalition against ISIL to prepare for the aftermath and the next stages of the war against the hardline group. Mosul is where ISIL leader Abu Bakr al-Baghdadi proclaimed the cross-border “caliphate” in June 2014, and its loss could spell the end of the group’s days as a land-holding force in the Iraqi part. Hollande said the Paris meeting aims at preparing Mosul’s future, and stressed that coalition members must help ensure the city’s future authorities represent all ethnic and religious groups so that the “long-awaited peace will come”.

US Defence Secretary Ashton Carter, also in Paris, said the meeting discussed, among other issues, “how we can protect our homelands even as we decimate ISIL in Iraq and Syria”. I am encouraged by the results of our campaign so far, it has been proceeding as planned,” said Carter. “The Iraqis are fighting with skill and commitment and courage, enabled by the coalition.” He added that the coalition was preparing to fight next Raqqa. While ISIL fighters in Mosul are outnumbered about one to 10, there are insufficient forces currently available to take on the estimated 3,000-4,000 ISIL fighters in Raqqa. We resolve to follow through with that same sense of urgency and focus in enveloping and collapsing ISIL’s control over Raqqa as well,” said Carter. “In fact, we’ve already begun laying the groundwork with our partners to commence the isolation of Raqqa.” Meanwhile, Kurdish Peshmerga forces are making gains on Mosul’s northeastern front, but federal forces advancing from the south have some way to go before reaching the outskirts. At the same time, thousands of men from the Hashed al-Shaabi paramilitary umbrella group dominated by Tehran-backed Shia militias were preparing for a push to the west of Mosul.

Iraqi Kurds and Sunni Arab politicians have opposed the Hashed’s participation in the operation, as has Turkey, which has a military presence east of Mosul despite repeated demands by Baghdad to withdraw its forces. Tensions have risen between Baghdad and Ankara, whose foreign minister, Mevlut Cavusoglu, warned on Tuesday that if there is a threat to Turkey, “we are ready to use all our resources including a ground operation”. Seeking to draw attention away from the Mosul campaign, ISIL has staged attacks in the northern city of Kirkuk and western town of Rutba in recent days.

ISIL fighters seized two neighbourhoods in Rutba, but officials said that as of Tuesday it was fully back in government hands – a claim which Al Jazeera was unable to independently verify. Senior Iraqi and US military officials have reported that ISIL leaders are already trying to leave Mosul to reach the Syrian side of their “caliphate”. Al Jazeera’s Imran Khan, reporting from Erbil, said: “Wherever ISIL are facing defeat, they are now popping up in other areas. We saw it in Kirkuk, we saw it in Rutba. There is still a lot of fighting to do. Everybody here in the military and Peshmerga are pleased with the way the operation is going.” –aljazeera