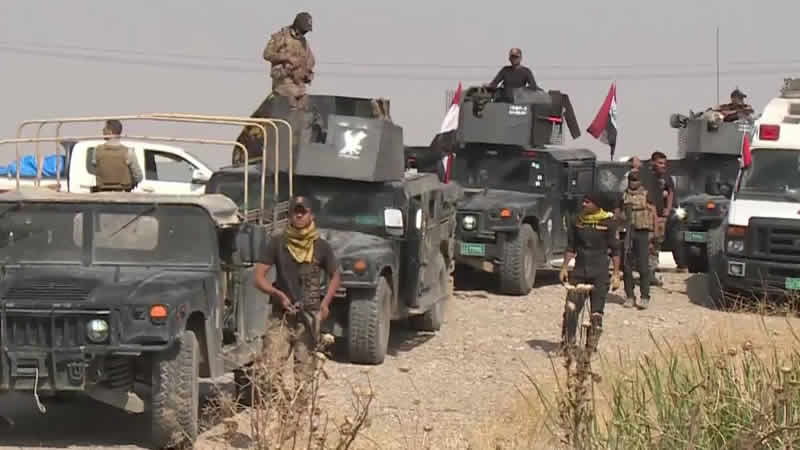 Iraqi army says its forces have advanced to the outskirts of Mosul, as thick plumes of smoke rise from the city’s east.

The Iraqi army says its forces have advanced to the eastern edge of Mosul for the first time since the Islamic State of Iraq and the Levant (ISIL, also known as ISIS) overran the city more than two years ago.

The country’s Joint Operations Command said in a statement on Tuesday that its forces had entered Judaydat al-Mufti, an area on the outskirts of Mosul and some 3km away from the city’s airport. Meanwhile, Iraqi State TV reported that the 9th armoured brigade had entered the district of Dweikhlah, in an attempt to open up a separate front in the battle against the armed group. The northern city of Mosul was the biggest prize captured by ISIL when it swept over much of Iraq’s north and west in the summer of 2014 and declared a “caliphate” across those lands and the ones it captured in Syria.

While Iraqi forces have clawed back large swaths of territory in the past year, retaking Mosul is considered crucial in the battle to defeat the armed group. Fighting was also raging on Tuesday in the eastern district of Gogjali as air strikes by the US-led coalition caused thick plumes of black smoke to rise high into the sky. Al Jazeera’s Stefanie Dekker, reporting from east of Mosul, said the fighting was intense as ISIL fighters were putting up stiff resistance against the approaching forces. We are being told by the Peshmerga forces that the black sky is the result of ISIL burning oil wells and tyres in and around Mosul,” she said. “Now we know this is one of their tactics, to try to obscure their position from coalition air strikes and also to obscure the ground. The smoke is incredibly thick, so it is an intense battle.”

Read More: US Transfers Widow Of Top IS Figure to Iraqi Custody

Estimates of the number of ISIL fighters in Mosul vary from a few thousand to “not more than 10,000”, according to the Iraqi government and the anti-ISIL coalition. Meanwhile, the Mosul offensive involves tens of thousands of soldiers, federal police, Kurdish fighters, Sunni tribesmen and Shia militias. Many of the militias – considered to be backed by Iran – were originally formed after the 2003 United States-led invasion to fight US forces as well as Sunni fighters. They were mobilised again, and endorsed by the government, when ISIL swept through Iraq in 2014, but they also have been repeatedly accused of human rights violations against the country’s Sunni minority. The United Nations forecasts that up to one million people risk being uprooted by the fighting, which UN aid agencies say has so far forced about 17,500 people to flee, a figure that excludes those taken into Mosul by the retreating fighters.

Also on Tuesday, the Turkish military deployed tanks and artillery to its southeastern border with Iraq, military sources said. A 30-vehicle convoy left Ankara for Silopi, sources told the AFP news agency, adding that it was now close to Adana province in southern Turkey. The sources did not explain why the convoy was being sent.Ankara has repeatedly insisted that it would be involved in the offensive in northern Iraq and would be “at the table”. Defence Minister Fikri Isik said Tuesday’s deployment was a part of Turkey’s preparation for “important developments in the region”, referring to Kurdish rebels inside the country and events in Iraq. Turkey is preparing in advance for whatever happens [and] this is one element of that,” he said, quoted by the official news agency Anadolu. As the Mosul offensive has progressed, bombings have continued in the capital, Baghdad, part of which many Iraqis think are sustained ISIL efforts to destabilise their country. In a monthly report released by the UN Assistance Mission for Iraq, 1,792 people were killed in violence in Iraq in October, up from 1,003 the previous month. One thousand, one hundred and twenty of the dead were civilians. aljazeera