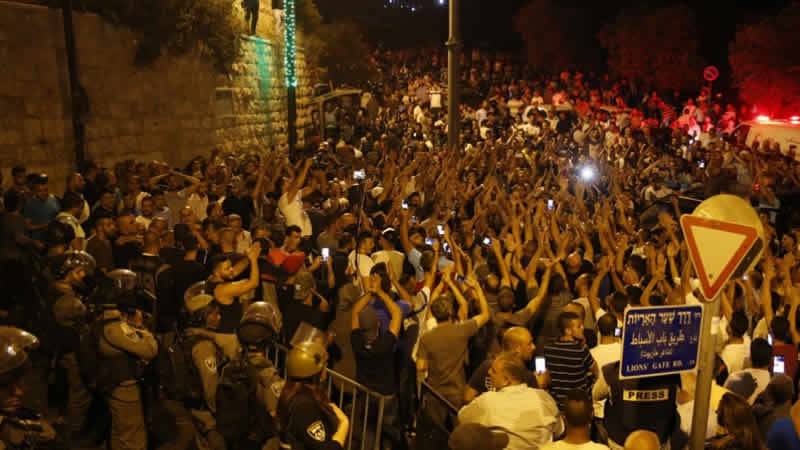 Israel has removed more security installations from the entrance to al-Aqsa Mosque compound in occupied East Jerusalem after protests and deadly unrest in recent days.

Newly installed railings, gates and scaffolding where cameras were previously mounted were removed from the entrance to the compound early on Thursday. On Tuesday, Israel had removed metal detectors from the entrance. Palestinians had been protesting against increased security, viewed as an encroachment of Israeli control over the holy site, and a form of collective punishment.

The measures, which also saw Palestinian men under the age of 50 banned from Friday prayers, were imposed after an alleged attack on July 14 at the compound carried out by Palestinian gunmen who killed two Israeli security guards. As workmen removed the extra security installations on Thursday, almost two weeks after the alleged attack, Palestinians gathered to celebrate, with whistling and constant horns from cars.

A Palestinan man in the crowds told Al Jazeera that he was there to mark a significant “victory”. Today is a joyful day, full of celebration and sorrow at the same time – sorrow for the people who lost their lives and were injured,” he said. At least six Palestinian protesters were killed in daily clashes – one of whom was shot dead by a settler – and hundreds were injured in confrontations with Israeli forces.

Most of the injuries inflicted by the Israeli forces were from rubber-coated steel bullets. A Palestinian also broke into a home in a Jewish settlement in the West Bank last week and stabbed four Israelis, killing three. We are under occupation and al-Aqsa Mosque is a red-line to everyone in Jerusalem – actually, to everyone in Palestine, and all over the Muslim world – but much more for the people of [Jerusalem]. It’s dearer than their own lives,” the Palestinian man in the crowds on Thursday told Al Jazeera.

Al Jazeera’s Imran Khan, reporting from outside the compound in occupied East Jerusalem, said the crowds were celebrating what protesters feel is a “significant victory” that has gone beyond simply protesting against security measures. This is very much a grassroots movement – this isn’t led by Hamas or Fatah, the traditional political leaders of the Palestinians,” he said.

“This is an occupied East Jerusalem movement; it’s effectively leaderless but it’s growing and growing.” A tense standoff has been under way between Israel and Muslim worshippers at the holy site despite the removal of the metal detectors, with concerns of major unrest later this week if no resolution is found. Muslims have refused to enter al-Aqsa Mosque and have been praying in the streets outside since the fallout began.

The compound houses the revered al-Aqsa Mosque and the Dome of the Rock. Israeli authorities said the metal detectors were needed because the July 14 attackers smuggled guns into the site and emerged from it to attack the security officers. There have been concerns that Friday’s main weekly Muslim prayers – which typically draw thousands to al-Aqsa Mosque – will lead to even more serious clashes between protesters and Israeli security forces.

It was not immediately clear whether Muslim authorities would now give their approval to re-enter the site. Mohammed Nuseibeh, deputy chairman of the Waqf Higher Council, told Al Jazeera they would not issue an official response until their own technicians had gone into the mosque compound and investigated.