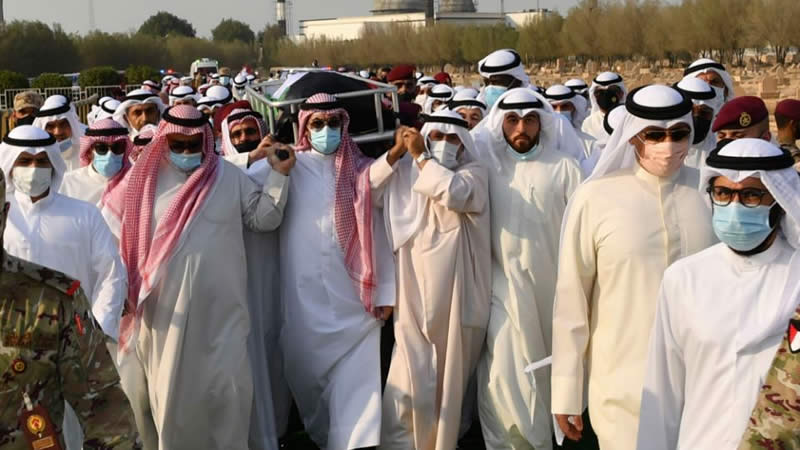 Kuwait’s deputy chief of the National Guard, who spent years in the oil-rich country’s security services, was nominated as crown prince on Wednesday, the Kuwaiti state news agency reported, a cautious selection at a turbulent time for Kuwait’s politics and the wider region.

Although Sheikh Nawaf had a full year to choose a successor, he picked Sheikh Meshal in a record-breaking eight days, ending frenzied speculation that has gripped Kuwaiti social media.

Before Sheikh Meshal can be officially named crown prince, lawmakers must approve the choice during their final session on Thursday, ahead of the formation of a new government — a rare vote for the region’s Arab monarchies in which the question of succession is typically decided behind palace doors.

Following the session, Kuwait’s parliament will dissolve itself ahead of elections tentatively set for late November.

At age 80, the low-profile Sheikh Meshal, another half-brother of the late Sheikh Sabah Al Ahmad Al Sabah, strengthens the royal family’s traditional ranks and is widely seen as a conventional and safe choice. While his health status remains unclear, he recently underwent a kidney transplant, according to a Washington Institute for Near-East Policy article from May 2018.

Given his career building up the interior ministry for over a decade, very little is known about his policy preferences. Unlike other top contenders for the post, he has steered clear of the country’s tumultuous politics and the royal family’s public feuds over corruption allegations.

Bader al-Saif, an assistant professor of history at Kuwait University, described the British-educated minister as a rare senior member of the royal family and political old guard who remains untainted by the country’s corruption scandals.

“He’s an insider and an outsider at the same time,” said al-Saif, noting that the country’s National Guard remains a respected institution above the political fray. “The unchecked corruption requires introducing a name that is fresh, and has no associations.”

Even so, Sheikh Meshal is no newcomer to Kuwaiti government. He was a close confidant of Sheikh Sabah throughout his tenure, accompanying him on official diplomatic visits as well as to the Mayo Clinic in Rochester, Minnesota, where the emir received medical treatment after surgery and later died.

His selection delays any generational change in Kuwait, reinforcing the contrast with Saudi Arabia and the United Arab Emirates, now in effect led by ambitious young princes. Under the late Sheikh Sabah, who commanded great respect as a seasoned diplomat in a region divided along political and sectarian lines, Kuwait managed to pursue independent foreign policies despite the pressures of more belligerent regional heavyweights.

“Change will happen in an orderly, gradual way,” said al-Saif. “This is the Kuwaiti way.”

The choice of Sheikh Meshal is also a sign that Kuwait will look inward in the years ahead. A worsening coronavirus outbreak, escalating tensions between the parliament and Cabinet and plunging oil prices have sharpened attention on Kuwait’s domestic grievances. Parliamentary gridlock has blocked the passage of a public debt law needed to raise $65 billion and mitigate the country’s looming liquidity crisis, and calls are growing for political reform.

Erdogan later headed to Qatar, where he met with its ruling emir. Turkey has backed the tiny Gulf state in the face of a years-long blockade by its neighbors over its support for Islamists. Ankara and Doha are also on the same side in Libya’s spiraling proxy war, backing the U.N.-supported government in Tripoli.