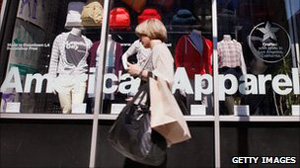 The US clothing chain American Apparel has said that there is “substantial doubt” the firm can continue as a going concern.But although the wording appeared in its financial statement for the fourth quarter, the company’s controversial founder played down the warning.
The company has been criticised for sexually overt advertising. Its founder is fighting sexual harassment charges.

Shares were hard hit after the statement but closed barely changed. American Apparel, which has 273 stores and 12,000 employees worldwide, reported sales down by 8.9% at $144m (£89.4m). The statement said: “2010 was an extremely challenging but productive year. We suffered the after-effects of a major labor disruption resulting from an immigration intervention in 2009.”
In that year a number of its employees were found to be illegal immigrants.

‘Extraordinary challenge’
It said the disruption to its production schedule led to “significantly higher production costs” per unit and late deliveries of products to stores and wholesalers. It also referred to what it called “extraordinarily challenging world-wide economic conditions” and higher raw material prices. It said there was “substantial doubt that the Company will be able to continue as a going concern” and that it could be prevented from borrowing under its credit agreements.

The annual report said the company may determine that it is in its best interests to file for a pre-packaged, pre-arranged or other type of Chapter 11 bankruptcy.
But the founder, Dov Charney, played down the warning. He told the Reuters news agency that the warning was a formality, saying: “We have to put it as a risk factor if it’s in the realm of possibility, even if it’s one in 1,000.”
American Apparel has been expressing doubts about its ability to continue as a going concern since last August -BBC