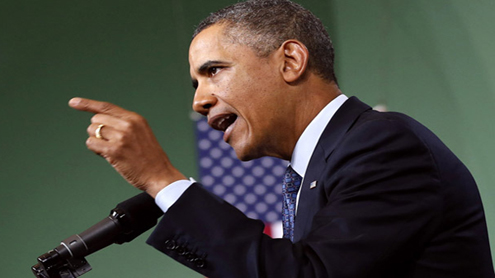 Contractors who worked on the much-maligned US healthcare website have told lawmakers the Obama administration must share the blame for its glitches.One senior executive told a congressional panel that the federal government was “the ultimate responsible party”.

The panel also heard that two contractors wanted more testing before the 1 October launch of the website. The Obama administration is in damage-control mode over the troubled rollout. At a health centre in Arizona on Thursday, Health and Human Services Secretary Kathleen Sebelius said technicians and administration officials were working “24-7” to fix glitches in the website and its technical underpinnings. And she dismissed Republicans’ calls for her to step down over the problematic healthcare rollout, saying those critics “do not want this programme to work in this first place”.

Amid the fallout, the White House late on Wednesday announced it would push back by six weeks the healthcare law’s requirement for individuals to buy insurance or face a tax penalty.Thursday’s testimony before the House energy and commerce committee began with Republican legislators arguing that the healthcare.gov website flaws were part of wider problems in the 2010 Affordable Care Act, which is commonly known as Obamacare. “The American people deserve something that works, or start over,” Representative Tim Murphy said, suggesting that the law be suspended until the problems are fixed.

The website is one part of the larger law, which includes increased requirements for insurance firms, a requirement that individuals carry insurance or pay a tax penalty, and subsidies for those who qualify to assist in the cost of the insurance. The non-partisan Congressional Budget Office previously said about seven million people would gain coverage through the federal website and others run by some states during the first year of operation. Democrats have lamented the technical issues but have defended the law, while criticising Republican attempts to undermine it. “Republicans don’t have clean hands coming here,” Democratic Representative Frank Pallone said.

The website’s glitches were politically overshadowed by a 16-day government shutdown, which began after Republicans tried to gut the law through budgetary brinkmanship in Congress. On Thursday, Cheryl Campbell, a senior vice-president of the Canadian-firm CGI, which created the front-end portion of the website, said that overwhelming interest from consumers had triggered the website problems. No amount of testing within reasonable time limits can adequately replicate a live environment of this nature” Ms Campbell said. But she also blamed administration officials, saying the health department should have served as the “quarterback” on the project and was the ultimate responsible party for the end-to-end performance”.

Andy Slavitt of QSSI, which created several elements of the online healthcare exchange, said a late decision to require consumers to create accounts before they could browse insurance plans contributed to the slow, malfunctioning website. “This may have driven higher simultaneous usage of the registration system that wouldn’t have occurred if consumers could window-shop anonymously,” Mr Slavitt said. Republican Representative Joe Pitts questioned this decision, pointing out that “window-shopping” was widely used in e-commerce, including in another government healthcare website for the elderly. “Who made that decision? When was it made? Why was it made?” Mr Pitts asked during the hearing.

Republican Representative Fred Upton said the Obama administration “appears allergic to transparency and continues to withhold enrolment figures” for the healthcare website. We still don’t know the real picture,” he said. “This is not about blame – this is about accountability, transparency, and fairness for the American public.” And some Democrats on the panel said they were frustrated with both the government’s and contractors’ handling of the situation. Representative Anna Eshoo, a Democrat who represents the Silicon Valley area, said it was a “lame excuse” to blame the website’s problems on a crush of visitors. Amazon and eBay don’t crash the week before Christmas,” Ms Eshoo said. “ProFlowers doesn’t crash on Valentine’s Day.”And Democratic Congresswoman Diana DeGette said: “These problems need to be fixed, and they need to be fixed fast.”

Ms Sebelius and other government officials are set to testify in front of legislators in a hearing next week. She was ridiculed earlier this month during an appearance on . The Daily Show when the host Jon Stewart pulled out a laptop and said: “I’m going try and download every movie ever made, and you’re going to try and sign up for Obamacare and we’ll see which happens first.” In response to the outcry over the technical issues, the administration will begin daily status briefings on the system, starting on Thursday.

On Wednesday, US health officials admitted the online system did not get enough testing before going live on 1 October, especially at higher volumes. The health law also allowed individual states to set up their own online insurance exchanges. Fourteen states and the District of Columbia went with this option – those websites have not reported so many problems. –Bbc