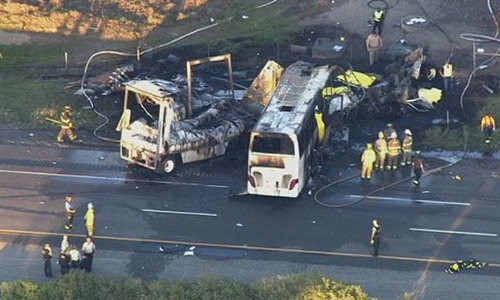 Nine people died Thursday and dozens were injured in a fiery, head-on Glenn County crash between a FedEx delivery truck and a charter bus carrying high school students on a visit to a Northern California college, police said. The drivers of the truck and bus were among the dead, along with seven others riding the charter bus, California Highway Patrol dispatchers said. Police have confirmed those seven were teenage students, the CHP said. “Anne and I extend our heartfelt and deep sympathies to the families, friends and loved ones of those who died in the tragic accident John Deasy this evening,” California Gov. Jerry Brown said in an emailed statement. “As we mourn the loss of those who died, we join all Californians in expressing our gratitude for the tireless work of the Red Cross and emergency personnel who responded bravely to this terrible tragedy.” In addition to the fatalities, about 35 people were hospitalized in the Interstate 5 collision.

The bus and truck were on opposite sides of I-5 when the truck crossed a grassy median and slammed into the bus, causing an explosion and fire near Orland, a CHP dispatcher told the Associated Press. The wreck happened just after 5:40 p.m., near Highway 32. Massive flames could be seen devouring both vehicles just after the crash, and clouds of smoke billowed into the sky until firefighters had quenched the fire, leaving behind scorched black hulks of metal. Bodies were draped in yellow plastic inside the burned-out bus. Investigators say the truck driver might have been trying to avoid a passenger car that was also involved in the collision. The bus was one of two that the admissions office at Humboldt State University had chartered to bring prospective students from Southern California up to tour the Arcata campus, Humboldt’s Vice President of Administrative Affairs Joyce Lopes said. University police were trying to determine what school districts the students were from and fielding telephone calls from anxious parents, Lopes said. “Our hearts go out to those who have been affected, and we are here to support them, and their families, in any way possible,” Humboldt State’s President Rollin Richmond said on the school’s website. Parents and family members of students who were on the bus can contact University police at 707-826-5555 for more information or guidance. This Red Cross website is available for help, as well. A first responder who helped set up a triage at the scene said the dozens of injured victims suffered from various ailments, ranging from severe to minor burns, broken legs and noses and head lacerations. “The victims were teenage kids. A lot of them were freaked out. They were shocked. They still couldn’t grasp what happened,” Jason Wyman with the Orland Volunteer Fire Department said. “You hear about it in the news, but you never seen anything like that.”

Wyman said when he drove a water truck to the highway, both the bus and truck were fully engulfed in flames, sending thick, dark smoke into the air. He said he was first focused on putting out the fire, and once it was under control, he saw dozens of people walking wounded. “The first victim that was taken out of the bus was severely burned,” Wyman said. Nine people were taken to Enloe Medical Center in Chico, hospital spokeswoman Christina Chavira said. Two of those patients were listed in critical condition, two in fair condition, and six were in undetermined condition as of 10 p.m. Thursday, said Denise Atkinson, an Enloe nursing supervisor. Mercy Hospital in Redding said it has received five patients — all listed in fair condition. The Shasta Regional Medical Center is in communication with emergency services, and officials there said they were told two helicopters and one ambulance are on the way. Shasta couldn’t provide any further details on the number of patients or their conditions. One uncle contacted KCRA 3 and said his 18-year-old niece, who attends R.F. Kennedy High, on Wilshire, has been taken to the UC Davis Medical Center with severe smoke inhalation. Bonnie Kourvelas, a FedEx spokeswoman, said in a statement Thursday night: “Our thoughts and prayers are with everyone involved in the tragic accident on I-5 in California. We are cooperating fully with authorities as they investigate.” Humboldt State spokesman Simon Chabel said the school was working to confirm where in Southern California the students on the wrecked bus are from.

Los Angeles Unified School District Superintendent John Deasy said that he didn’t know how many students from his district were victims of the crash. A high school senior from Alliance Renee & Meyer Luskin Academy High School in Los Angeles said she and a few of her classmates who were accepted to the university were invited to go on the tour. Sabrina Garcia said the tour began Thursday, with buses taking students in Southern California on a 13-hour ride to the campus for a three-day stay on campus. She said she decided to postpone the tour because she had a school project to complete. “I was devastated when I heard about the crash, and relieved that I didn’t attend,” Garcia said. “I can’t imagine how those kids feel. You think you’re going somewhere safe with your school – and you end up in an accident.”  -Kcra

Truck in Orland crash slammed into charter bus… by thetimesofpakistan