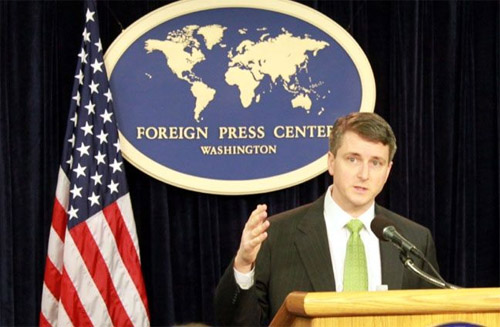 The United States has raised the issue of continuing violence along the Line of Control (LoC) in the disputed Kashmir region, with both Pakistan and India and asked them to resolve the tensions through dialogue, a senior American diplomat has said.

“We are extremely concerned by reports of violence over the last two weeks along the Line of Control and the working boundary,” US Special Representative for Afghanistan and Pakistan Dan Feldman told a Washington think tank.

“I’ve personally raised these concerns with each side – and urged them to engage in dialogue to reduce tensions and end the violence,” he said in a speech to the Atlantic Council. Feldman noted that “there is no relationship more critical to Pakistan’s future than its relationship with its neighbour.”[contentblock id=2 img=adsense.png] “And I am convinced that India’s rise in prosperity and global leadership cannot be fully realised until it has a better relationship with Pakistan,” he added. On North Waziristan operations and counterterrorism efforts, Feldman said the operations clearly disrupted militant activities – but the job is not done. “Militant groups, including the Haqqani Network and the Pakistani Taliban, continue to pose a threat to Pakistan, its neighbours, and the US.

It is vital that these operations continue, and that every effort is made to prevent the safe havens from being reconstituted.” He said many in Pakistan were surprised by what they discovered in Miranshah and Mir Ali – including networks of tunnels, IED factories, and heavy munitions.

Eliminating these safe havens is not just about eliminating one group, or one leader, it is a job that requires continued vigilance, he said. Feldman said the United States has appreciated the vocal leadership of many senior Pakistanis including Prime Minister Nawaz Sharif and Chief of Army Staff Raheel Sharif in this regard. -nation

5 Things About Ebola You Should Know

5 Things About Ebola You Should Know