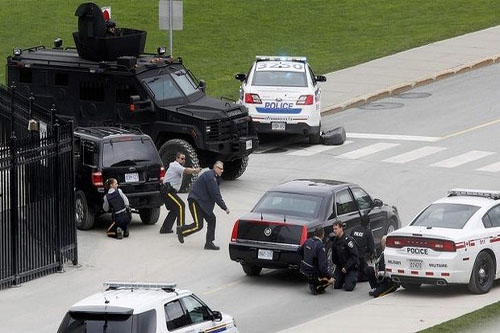 Canadian Prime Minister Stephen Harper described the perpetrator of a “brutal and violent” attack on the Parliament complex in Ottawa that left a soldier dead Wednesday as a “terrorist” in an address to the nation.

“We will not be intimidated. Canada will never be intimidated,” Harper said before vowing that the attack would “lead us to strengthen our resolve and redouble our efforts” to keep the country safe and work with Canada’s allies to fight terrorists. The assault rocked Parliament over and over with the boom of gunfire, led MPs to barricade doors with chairs and sent people streaming from the building in fear. Harper was addressing a caucus when the attack began outside the door, but he safely escaped. He gave his address Wednesday evening from an undisclosed location. Earlier Wednesday, Canadian authorities identified the shooter as Michael Zehaf-Bibeau, 32. A government official told Fox News that they have been advised that Zehaf-Bibeau, a Quebec native, was thought to be a recent convert to Islam who had changed his name from Michael Joseph Hall. Investigators offered little additional information about the gunman. However, Harper said in his address that “in the days to come we will learn about the terrorist and any accomplices he may have had.” Court records that appear to be the gunman’s show that he had a long rap sheet, with a string of convictions for assault, robbery, drug and weapons offenses, and other crimes. The shooting, which triggered a lockdown of Canada’s capital, came just two days after a deadly hit-and-run terror attack targeting soldiers in Quebec by a man the Prime Minister referred to as an “ISIL-inspired terrorist.” That killer, also identified as a convert to Islam, had been on the radar of federal investigators, who feared he had jihadist ambitions and seized his passport when he tried to travel to Turkey. ISIL, better known as Islamic State or ISIS, has called for reprisals against Canada and other Western countries that have joined the U.S.-led air campaign against the extremist group in Iraq and Syria. On Tuesday, Canada had raised its domestic terror level from low to medium due to “an increase in general chatter from radical Islamist organizations like ISIL, [contentblock id=2 img=adsense.png]

Al Qaeda, al-Shabab and others who pose a clear threat to Canadians,” said Jean-Christophe de Le Rue, a spokesman for the public safety minister. Counter-terrorism investigators are reviewing Zehaf-Bibeau’s social media traffic and profile, with a focus on any link to Monday’s attack, which killed one soldier and injured another.  The Toronto Globe and Mail said sources had told the paper Zehaf-Bibeau was recently designated a “high-risk traveler” by the Canadian government and his passport had been seized. By Wednesday night, three persons who had been taken to Ottawa Hospital with minor injuries were all released. The first shots rang out just before 10 a.m., when a guard at the National War Monument was fatally shot. The gunman next ran into the Parliament Hill building, where one MP reported hearing as many as 30 shots fired and a sergeant at arms was later credited with shooting the suspect dead. In the following moments and hours, Royal Canadian Mounted Police converged on the scene, more shots were reported less than a mile away near a mall and officials told Ottawa residents to barricade themselves in their homes as they searched for more possible gunmen. Police said in the initial hours that as many as two other gunmen may have taken part in the attacks. But by late in the evening, the cordon around Parliament was lifted and police said there was no longer any threat to the public in the area. “We’re still in the process of clearing Parliament Hill. It is a slow and methodical process,” Ottawa police Chief Charles Bordeleau said Wednesday afternoon. The shooting at the government complex came after witnesses said they saw at least oneman jump out of a Toyota Corolla and run toward the memorial and open fire on the soldier, who later died at Civic Hospital. [contentblock id=3 img=adsense.png]

The Canadian Broadcasting Corporation had video of the gunman going to his car alone with his weapon after the shooting at the memorial. The car was later spotted parked in front of Parliament Hill, just down the block. The soldier was identified as Cpl. Nathan Cirillo, according to his aunt, the Globe and Mail reported. Cirillo was a member of the Argyll and Sutherland Highlanders, a regiment of Reserve Forces based in Hamilton, according to the Globe, and was training to join the Canada Border Services Agency. “Our thoughts and prayers are with the member and his loved ones,” Bordeleau said. After shooting the guard, the gunman ran to the Parliament building and unleashed a flurry of shots in the building, where witnesses later said they saw a man down near the library. Bernard Trottier, a Toronto-area MP, tweeted that the gunman inside Centre Block “has been shot and killed.” Veteran Affairs Minister Julian Fantino told QMI Agency that Parliament’s sergeant-at-arms, Kevin Vickers, shot the gunman dead. “All the details are not in, but the sergeant-at-arms, a former Mountie, is the one that engaged the gunman, or one of them at least, and stopped this,” Fantino said from inside Centre Block. “He did a great job and, from what I know, shot the gunman and he is now deceased.” –foxnews