Watch Video: Security in Ferguson Is Tightened After Night of Unrest 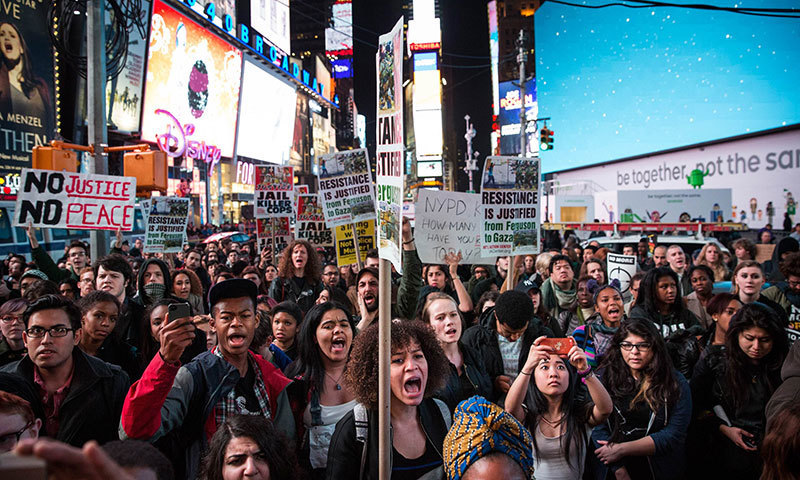 Gov. Jay Nixon of Missouri said on Tuesday that he would increase the number of National Guard troops in this suburban St. Louis city and broadly expand their role in keeping the peace,

After a night of arson, looting and rampaging demonstrators showed that weeks of preparation for a grand jury decision in the fatal shooting of Michael Brown had failed to prevent violence. In Washington, St. Louis and Ferguson itself, an array of public officials, community leaders and clergy were deeply critical of one another as they sought to explain how protests over the grand jury’s decision not to indict the white police officer in the shooting had spun further out of control than the unrest that followed the death in August of Mr. Brown, who was black. “What they’ve gone through is unacceptable,” Mr. Nixon said, appearing frustrated at a news conference in St. Louis as business owners along two commercial strips in Ferguson began sweeping up broken glass and trying to assess losses. One of the streets, West Florissant Avenue, a main thoroughfare not far from where the shooting took place, was still smoky on Tuesday and cordoned off by police. “No one should have to live like this,”

Mr. Nixon said. “No one deserves this.”On Tuesday night, West Florissant remained closed to the public. Outside the Ferguson Police Department along another stretch of road, officers in riot gear were backed by a line of National Guard members who stood behind new, concrete barricades. A few blocks away, demonstrators tried to set fire to a police car parked outside City Hall, but officers swarmed the street, set off clouds of tear gas and tried to clear the area — a far stronger show of force than had come a day earlier. Some arrests were made, and members of the Guard appeared to be assisting the police in taking people into custody. Officials were unwilling to provide details about the number of troops when Mr. Nixon first called up the Missouri National Guard last week in advance of the grand jury announcement, but it was clear that he wished to send a precise and powerful message on Tuesday. President Obama opened a speech in Chicago by talking about Ferguson, saying that he had ordered Attorney General Eric H. Holder Jr. to undertake a major review of policing practices in the United States, including a community-by-community process of identifying and highlighting specific steps to “make sure that law enforcement is fair and is being applied equally to every person in this country.” -nytimes