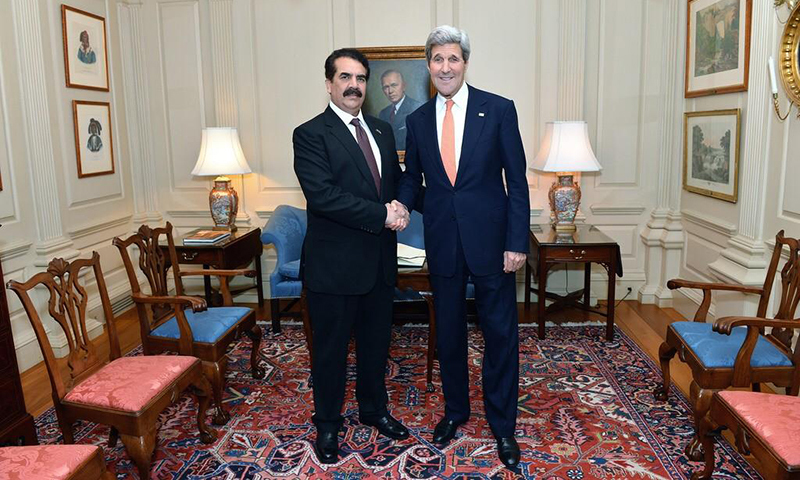 Chief of Army Staff General Raheel Sharif met with US Secretary of State John Kerry on Sunday at the US Department of State, according to a Twitter update by Director General of the Inter-Services Public Relations (ISPR) Major General Asim Bajwa. During the meeting General Raheel Sharif presented Pakistan’s perspective on regional security issues. US Secretary of State John Kerry acknowledged Pakistan’s role in fighting terror and the sacrifices rendered by the country. He also praised the professionalism of Pakistan Army and termed the institution a ‘truly binding force’. Kerry also welcomed progress on improved ties between Pakistan and Afghanistan as a step towards regional stability and assured the UNited States’ full support in this regard. Praise from the US Secretary of State follows acknowledgment of Pakistan’s efforts by US Special Representative for Afghanistan and Pakistan, Dan Feldman.

The US envoy, after holding a meeting with Army Chief Gen Raheel Sharif had said, “Yes, we all recognise that significant progress has been made” in the fight against terrorists since the North Waziristan operation, he said. “We also recognise that more work needs to be done, but there’s true commitment from Gen Sharif to deliver on this,” said the US envoy. “People in Washington were very pleased with his commitment” to fighting all terrorists, including the Haqqani network, he said. Gen Sharif came to the United States on a two-week visit earlier this month for talks on strategic issues and on Operation Zarb-i-Azb. He has already met senior officials at the White House, the State Department and the US Department of Defence. He also met US services chiefs and visited headquarters of the US Central Command for talks on issues related to US strategies in the Pak-Afghan region. The Central Command oversees US military efforts in Afghanistan, Iraq and Syria. During his presentations in Washington, Gen Sharif assured the US administration that the operation in North Waziristan was directed against all terrorist groups.