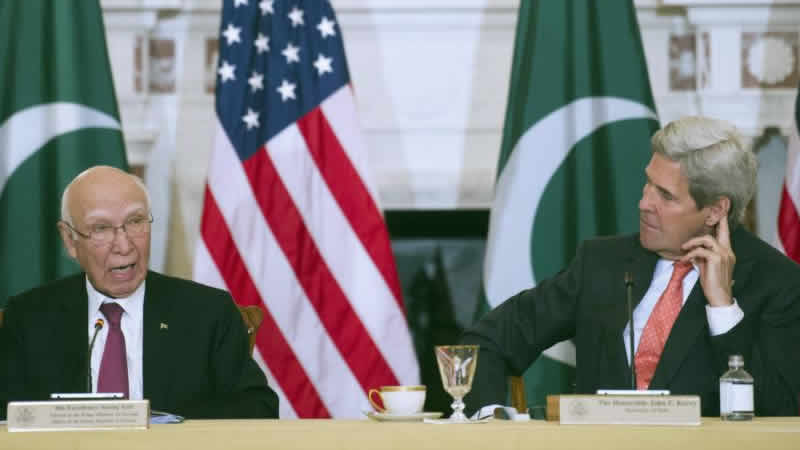 Pakistan remains committed to lessening the risk of an armed conflict in South Asia, says a joint statement issued after the US-Pakistan Strategic Dialogue.

The document also underlines Washington’s recognition of Kashmir as a dispute that needs to be resolved peacefully.

“Pakistan affirmed that it remains committed to pursuing measures aimed at building confidence and lessening the risk of armed conflict,” said the statement issued on Tuesday evening, a day after the talks concluded. “The United States and Pakistan emphasised the importance of meaningful dialogue in support of peaceful resolution of outstanding issues, including Kashmir,” it added. The chapter on “fostering strategic stability” deals with preventing the proliferation of Weapons of Mass Destruction (WMDs) and their means of delivery to states as well as non-state actors. It rebinds Pakistan to United Nations Security Council Resolution 1540, which requires all member states to enforce appropriate and effective measures against proliferation. In the joint statement, the US acknowledged Pakistan’s ongoing efforts to harmonise its strategic trade controls with those of the multilateral export control regimes.

The US praised Pakistan for its proactive engagement with the international community, including through its hosting of IAEA training activities at its Nuclear Security Centre of Excellence and its active participation in the Nuclear Security Summits. The US also appreciated Pakistan’s commitment, in principle, to ratify the 2005 Amendment to the Convention on the Physical Protection of Nuclear Material. “Both sides recognised the shared interest in strategic stability in South Asia and in pursuing increased transparency.” In the chapter on “regional cooperation,” Washington welcomed Islamabad’s commitment to facilitating an Afghan-led and Afghan-owned peace and reconciliation process. “The two sides underscored the imperative of quickly catalysing direct peace talks between the Afghan government and the Taliban to end the bloodshed and preserve Afghanistan’s unity, sovereignty, and territorial integrity.” Secretary of State John Kerry, who led the US team at the dialogue, welcomed Pakistan’s calls on the Taliban to seek a negotiated settlement to end the Afghan conflict and its constructive role in establishing and hosting the Quadrilateral Coordination Group.

The two countries agreed that all members of the group ‘will intensify their efforts to forge broader regional consensus” in support of the Afghan-led reconciliation process as the best way to bring peace and stability to the region. While emphasising the need for peaceful resolution of outstanding issues between India and Pakistan, the delegations urged both to “continuously act with maximum restraint and work collaboratively towards reducing tensions”. The US noted that Pakistan had detained Jaish-e-Muhammad leader Maulana Masood Azhar, and commended its commitment to bring the perpetrators of the Jan 2 attack on the Pathankot airbase to justice. The chapter on “countering terrorism” emphasised the need for effective action against all violent extremists, “specifically underscoring that no country’s territory should be used to destabilise other countries”. Adviser Sartaj Aziz, who led the Pakistani delegation at the talks, affirmed Pakistan’s resolve to take effective action against UN-designated terrorist individuals and entities, including Al Qaeda, the Haqqani network, and Lashkar-e-Taiba and its affiliates.

The US and Pakistan also committed to “eliminate the threats posed by violent extremism and terrorism.” The two sides emphasised the importance of strengthening Pakistan’s capabilities to more effectively counter the use of improvised explosive devices. The chapter on “defence and security cooperation” expressed the desire for the US-Pakistan bilateral security relationship to continue on a mutually beneficial and sustainable trajectory. “The United States reiterated its continuing support for the armed forces of Pakistan in their ongoing counter-insurgency operations in Fata and disruption of militant networks.” The two countries underscored the importance of bilateral defence cooperation as “serving their mutual interest and noted their willingness to explore new avenues to refine defence collaboration”. They noted the challenges of enabling the return of internally displaced persons to Fata in the wake of operations.

Read More: Afghanistan, IS to figure in Pakistan-US talks

Acknowledging the emerging terrorist threat posed by the militant Islamic State group in the region, the US and Pakistan agreed to work closely together to counter it, and affirmed their commitment to combat the extremist ideology that fuels such groups. Talking to reporters, Mr Aziz said Pakistan would not accept any unilateral curb on its ‘dynamic’ nuclear program. He cited a “strategic and conventional imbalance with India” as the main cause for Pakistan’s pursuit for nuclear deterrence, but also emphasised the need for staying engaged with India for reducing tensions in the region. He said the Pakistani and Indian prime ministers might meet on the sidelines of a nuclear summit being held here later this month. “No unilateral action. If India’s capacity changes, we will have to follow. That’s what effective deterrence is,” Mr Aziz told a Tuesday evening news briefing at the Pakistan Embassy. He rejected India’s claim that Pakistani agencies were involved in the Jan 2 terrorist attack on an airbase in Pathankot as a “globally incorrect statement”.

Mr Aziz countered the Indian allegation with a claim that “Indian state actors are involved in stirring troubles in Balochistan, Karachi and Fata.” At two earlier meetings with the Defence Writers Group and at a think-tank, he disagreed with Secretary of State Kerry’s call to reduce or cap Pakistan’s nuclear arsenal. He rejected the suggestion that non-state actors could access Pakistan’s tactical nuclear weapons. “In terms of the safety and security of nuclear weapons command and control system, we have made outstanding progress,” he said. “Globally all the international agencies and the US have acknowledged that Pakistan has developed a very good system for the safety for export control, and command and control system.” At the Council on Foreign Relations, Mr Aziz also explained Pakistan’s concept of nuclear deterrence. “Our nuclear capacity is a deterrent against Indian capacity. Deterrent is not a static concept. It is a dynamic concept. If your adversary goes on expanding its capacity, then you have to respond. It is not something that you can take for granted.

“We keep insisting in our relationship that India is the independent variable in this. We are the dependent variable. So if India were to restrain and US would not increase its strategic and conventional imbalance between the two countries, then our task would become easier,” he said. Mr Aziz explained that in conventional terms, the imbalance with India had increased phenomenally. “In 1990s our defence budget was $3.5 billion and India’s was $11bn. We have moved from $3.5bn to $7.5bn. India has moved from $11bn to $50bn. So it makes our task much more difficult,” he said. He also explained that while Pakistan had no problem with the increasing closeness between the US and India, it did want the Americans not to allow this conventional imbalance to widen further. “This is our complaint with them that you are welcome to develop your relationship with India the best way you can, but keep in mind that you do not increase this imbalance between the two countries, or contribute to creating the atmosphere so that we don’t need all these things,”

Mr Aziz said. While talking to the Pakistani media, the adviser said Pakistan had concrete policy for dealing with various terrorist groups. “It is not a one fits all policy. Our action against the TTP is different from our action against the Haqqani network or the Lashkar,” he said. “But we are committed to act against all those who have been sanctioned by the UN. This strategy has been framed in accordance with our capacity, keeping in mind our strength as well as our limitations,” he added. Mr Aziz said the US and Pakistan were redefining their defence collaboration, moving from “an item by item approach to a medium-term framework.” He said US officials had assured their Pakistani counterparts that the contentious F-16 deal would be finalised and Pakistan would get the aircraft.

Revelations By Money laundering Suspect To Be Assessed