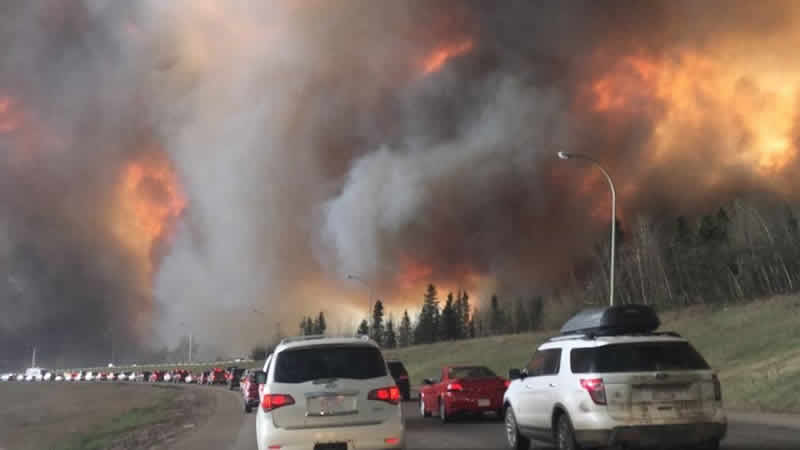 The price of oil pushed toward $50 a barrel Tuesday as wildfires spread in Canada’s oil sands region forcing thousands more to evacuate.

Authorities evacuated about 8,000 people from some 20 camps and facilities north of the city of Fort McMurray in Alberta. Some 100,000 residents and oil workers had been evacuated from Fort McMurray and its surroundings two weeks ago. Canada’s largest oil company, Suncor, was forced to shutter its Fort McMurray operations almost immediately after having gotten them back up and running. Tim Evans of Citi Futures cited the loss of 1.2 million barrels per day of Canadian output this month as “a major factor in tightening the overall supply/demand balance.”

US benchmark West Texas Intermediate (WTI) for June delivery rose 59 cents to $48.31 a barrel on the New York Mercantile Exchange, its highest closing level since early October. In London, Brent North Sea for delivery in July, the global benchmark, settled at $49.28 a barrel, up 31 cents from Monday. A break above $50 in the next few days is very possible,” said BMI Research oil and gas analyst Peter Lee. “In the second half of the year, oil is likely to hold between $45 to $50 a barrel,” he told AFP.

Oliver Sloup at iiTrader.com that in addition to support from the Canadian fires, a fall in US crude production for 16 straight weeks was feeding hopes of tightening the market. Sloup said that the market’s upward bias, which has pushed prices up more than 80 percent since February slump, appears intact. Every drop that has happened recently has just been bought up by buyers, and that has been the same story day in and day out it seems,” he told AFP. But, Sloup warned, “we’re approaching that psychological level of $50 where you might see some of these people that have been long the market maybe take some profit off the table.” The last time WTI closed above $50 was July 21.