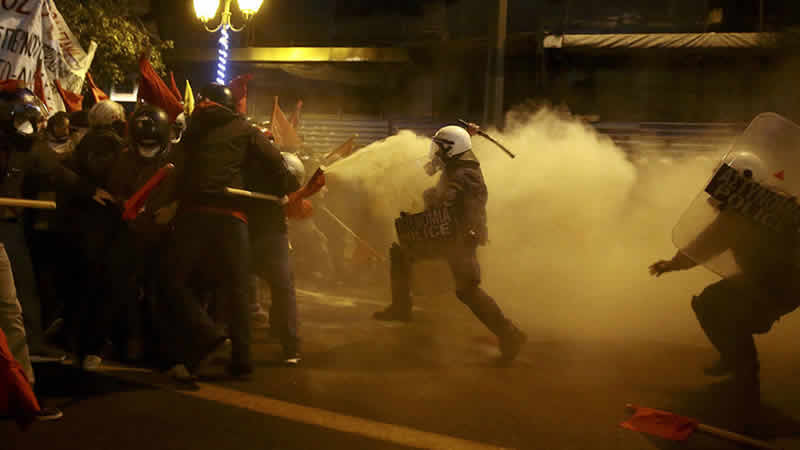 Police have battled with anarchists late into the night following two marches protesting against US President Barack Obama’s visit.

Greek police estimated as many as 150 anarchists were involved in Tuesday’s clashes. They responded to rocks and Molotov cocktails with tear gas and stun grenades.

A march by PAME the communist party labour union] ended peacefully. A second march pushed up against a police cordon and protesters threw two Molotov cocktails,” an Athens police spokesman told Al Jazeera. “That’s when the clashes began.” By late at night, police had confined the violence to the area of the Athens Polytechnic, a campus anarchists have used in the past as a safe haven from police, who are not allowed onto university grounds without a request from the chancellor. Police said there were no injuries or damage to private property. Some 8,000 protesters walked through central avenues chanting slogans against the European Union, NATO, and the International Monetary Fund, a staple of left-wing marches. Leftists normally hold an annual protest march outside the US embassy on November 17 to commemorate the crushing of a student uprising by a military dictatorship in 1973.

But Obama’s arrival two days before kicked off demonstrations early this year. The last time a US president came to Athens 17 years ago, violent protests again marred the visit. NATO ended the Yugoslav war in 1999 by bombing Greece’s Orthodox ally Serbia. Anger against NATO’s deployment against a European country and US ally in World War II fuelled protesters’ anger at the time. But then-president Bill Clinton defused the tension by apologising for US support for the military dictatorship that crushed the Polytechnic uprising. When the junta took over in 1967 here, the US allowed its interests in prosecuting the Cold War to prevail over its interest – I should say obligation – to support democracy, which was after all the cause for which we fought the Cold War.

It is important we acknowledge that,” Clinton said to thunderous applause. On November 14, 1973, students at the Athens Polytechnic went on strike to protest against Greece’s US-backed military regime. On November 17, the army stormed the polytechnic and killed an unknown number of students. Earlier on Tuesday, President Obama and Alexis Tsipras, Greece’s prime minister, exchanged complimentary remarks. In the economic crisis of 2008, [Obama] led the US economy on a completely different path to that chosen by Europe,” Tsipras said. Eight years later, the results are more than visible.” In prepared remarks, Obama said: “I know this has been a painful and difficult time, especially for Greek workers, pensioners, and young people. I’ve been clear from the beginning of this crisis that in order to make reforms sustainable, the Greek economy needs the space to return to growth and start creating jobs again.

We cannot simply look to austerity as a strategy, and it is incredibly important that the Greek people see improvements in their daily lives.” The left-wing government in Greece has touted Obama’s visit as a vindication of its efforts to deliver social justice and keep society stable, as austerity policies have led to an economic depression. Obama was due to address the Greek people on Wednesday. Many Greeks feel that had Obama’s visit come sooner in the economic crisis, it might have helped more. The fact that Obama is choosing to visit Greece helps Greece,” said Aristotelis Tsiampiris, international-relations expert at Piraeus University. “But I’m not going to hold my breath that two months before he exits the White House, magically he’s going to resolve the debt crisis, the immigration crisis, and everything else that is ill with Greece. That is not going to happen and could not have happened.” Donald Trump’s election in the US also weakens Obama’s hand. The Democratic Party will not be in power come January. Nonetheless, many people here hope that Obama’s presence will lend weight to his message of support for Greece. -aljazeera