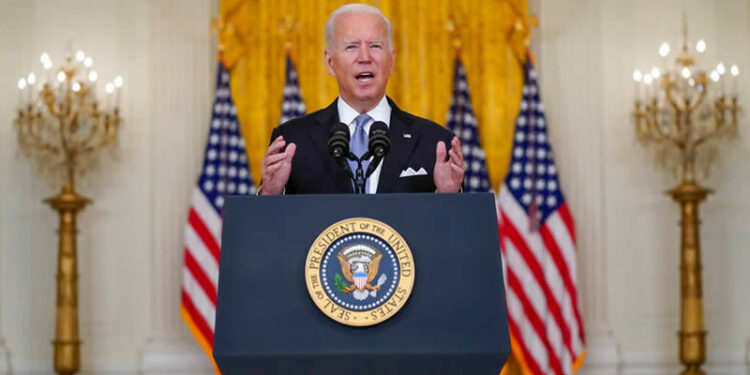 US President Joe Biden said on Monday he stood “squarely behind” his decision to withdraw US troops from Afghanistan despite searing images of chaos in Kabul that exposed the limits of US power and plunged him into the worst crisis of his presidency.

Breaking his silence on the US pullout after scenes of bedlam dominated television news channels for days, Biden blamed the Taliban’s takeover in Afghanistan on Afghan political leaders who fled the country and the unwillingness of the US-trained Afghan army to fight the militant group.

He did not shy away from heaping criticism at the Western-backed government that was overthrown in Kabul, saying US troops could not defend a nation whose leaders “gave up and fled,” as did Afghan President Ashraf Ghani.

“We gave them every chance to determine their own future. We could not provide them with the will to fight for that future,” US president Biden said, adding he could no longer ask US soldiers to risk their lives in the country, 20 years on.

“Our mission in Afghanistan was never supposed to have been nation-building.”

He warned Taliban leaders they would face “devastating force” should they interfere with the US pullout.

Biden was forced to send US troop reinforcements to Kabul to ensure a safe withdrawal of American diplomatic personnel and civilians as well as Afghan citizens who worked with the US and could face reprisals.

The panicked evacuation, coming weeks after Biden predicted the Taliban’s takeover in Afghanistan was not inevitable, has dented America’s image on the global stage just as Biden has sought to emphasize to world leaders that “America is back” after former president Donald Trump’s tumultuous four years.

The pullout has also raised fears that militant groups like Al Qaeda could reconstitute under Taliban rule.

Biden, rejecting harsh criticism of his Afghan policy from Republican and Democratic lawmakers, some former generals, and human rights groups, was resolute in defending his withdrawal from a 20-year war that endured through four presidencies.

“I stand squarely behind my decision,” Biden said in a televised speech at the White House. “After 20 years I’ve learned the hard way that there was never a good time to withdraw US forces. That’s why we’re still there.”

Biden said he found some of the scenes of chaos in Kabul “gut-wrenching” but that he did not start moving out evacuees sooner because President Ashraf Ghani did not want a mass exodus.
Political risks unclear

He acknowledged that the Taliban’s speed in retaking the country was unexpected. The rapid advance stunned American officials who predicted that the Afghan army would either repel the militants or hold them off for months.

“The truth is: This did unfold more quickly than we anticipated. So what’s happened? Afghanistan’s political leaders gave up and fled the country. The Afghan military gave up, sometimes without trying to fight,” Biden said.

He also doled out criticism to his Republican predecessor, Trump, whose administration negotiated a deal with the Taliban that Biden said left the group “in the strongest position militarily since 2001”.

Critics of Biden have focused on the way the US withdrawal is being carried out, as the video showed Afghans flooding runways at the Kabul airport and desperately trying to grab the fuselage of a US plane rolling on the tarmac.

“The president’s failure to acknowledge his disastrous withdrawal provides no comfort to Americans or our Afghan partners whose lives hang in the balance,” Republican Senator Mitt Romney said in a tweet.

My statement on Afghanistan: pic.twitter.com/NmIYKZLI7x

Biden singled out for criticism the two main Afghan leaders, Ghani and Abdullah Abdullah, head of the country’s High Council for National Reconciliation, saying they had “flatly refused” his advice to seek a political settlement with the Taliban.

“How many more generations of America’s daughters and sons would you have me send to fight Afghans — Afghanistan’s civil war when Afghan troops will not? How many more lives — American lives — is it worth? How many endless rows of headstones at Arlington National Cemetery?” Biden asked.

On Monday night, Biden authorized up to $500 million from an emergency fund to meet “unexpected urgent” refugee needs stemming from the situation in Afghanistan, including for Afghan special immigration visa applicants, the White House said.

The United States is preparing to begin evacuating thousands of Afghan applicants for special immigration visas (SIVs) who risk retaliation from Taliban insurgents because they worked for the US government.

Whether Biden will face a long-term political risk for Afghanistan is unclear.

Foreign policy does not typically play a major role in US elections. Many Americans have expressed support for Trump’s and Biden’s decision to leave Afghanistan, America’s longest war.

But Republican Representative Mike McCaul signaled his party might try to frame the Afghan chaos as a national security issue that makes the United States more vulnerable to a terrorist attack.

“I think it is going to taint this presidency, to a large degree, on national security,” he said.

The US and allies invaded Afghanistan following Sept 11, 2001, attacks on New York and Washington and toppled the Taliban.

Biden also said his decision was a result of the commitment he made to American troops that he was not going to ask them to continue to risk their lives for a war that should have ended long ago.

“Our leaders did that in Vietnam when I got here as (a) young man. I will not do it in Afghanistan,” he said.

“I know my decision will be criticized but I would rather take all that criticism than pass this decision on to another president.”
‘Devastating’

Taliban fighters have taken over checkpoints across Kabul, and militants with rifles slung over their shoulders walked through the streets of the Green Zone, the heavily fortified district that houses most embassies and international organizations.

Ghani’s departure on Sunday finalized the collapse of his government. His whereabouts are currently unknown.

The Taliban sought to reassure the international community that Afghans should not fear them, with co-founder Abdul Ghani Baradar saying the militants needed to show that they could “serve our nation and ensure security”.

China was the first major nation to flag support for the Taliban, stating it was ready for “friendly relations”. Both Russia and Iran also made diplomatic overtures.

The State Department said any US ties with a Taliban government would depend on their respect of human rights and rejection of extremism.