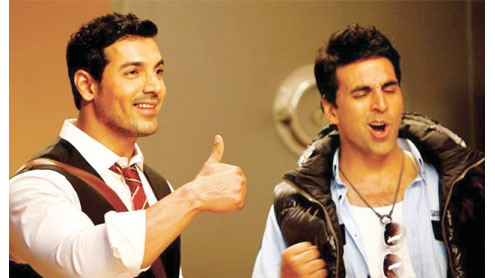 “The film is about male escorts and that is adult content. Period. Anywhere in the world, males escorts are subjects for adult contemplation,” said a senior film-maker on condition of anonymity.Apparently, CBFC regional officer JP Singh firmly turned down the director’s request for a UA certificate. Dhawan felt an ‘A’ certificate would curtail his potential audience-profile drastically.

Dhawan, whose father David apparently never got an A-rating in his entire career as a film-maker, is dismayed at his maiden film being tagged as an adult fare. “I’m extremely disappointed and saddened by the censors’ verdict. I’ve made a positive feel-good film. I think it’ll go down as the cleanest ‘A’ certified film ever,” he said.

Starring Akshay Kumar, John Abraham and Deepika Padukone, the film, which is set to release on the weekend, is about two men who cannot find jobs and become male strippers to earn money. In the past, Abraham and Kumar had teamed up for Priyadarshan’s Garam Masala (2005) which was a hit, with both the actors being widely appreciated. Meanwhile, Abraham worked with Abhishek Bachchan in Karan Johar’s Dostana. The chemistry between the two actors was believable and humourous and the film went on to become one of the highest-grossing films at the box office in 2008, reports hindustantimes.com

In a recent interview, Padukone dispelled the (mis)perception that Desi Boyz has a Dostana hangover. “Just because it’s a film about male bonding, it doesn’t have to be like Dostana,” TOI quoted her as saying. “In fact the first film that comes to my mind when I see Akshay and John together is Garam Masala because that got them together for the first time. But let me tell you that Desi Boyz is not in the same category as Dostana or even Garam Masala.”

When asked if Dhawan takes his father’s style of comedy film-making further, Padukone replied, “It’s too soon to say how good a film-maker he is or whether he is like his father or not. Of course he has learnt a lot from David Dhawan and other film-makers since he has grown up in the industry. But, I would say, he has an identity of his own and Desi Boyz is entirely his film.” – Thetribune