‘The Avengers’ for those who don’t read comic books 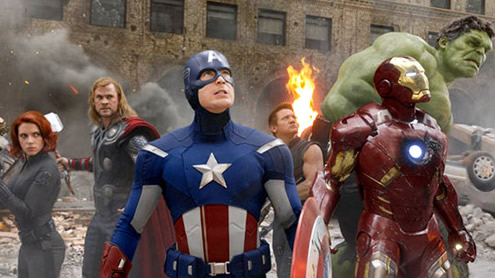 LOS ANGELES – “The Avengers” assemble this weekend in what many box office analysts are predicting will be the biggest opening in movie history.

It’s an event that Marvel Studios, the company behind the superhero films, has been building up to since “Iron Man” opened in 2008, teasing the super-team flick in each men-in-tights film it sends to theaters. But not everybody grew up reading comics or had the time to watch the nearly half-dozen films that led up to the blockbuster hopeful. To that end, TheWrap has assembled a helpful guide to get you brushed up on the back story behind “earth’s mightiest heroes.”

Who Exactly Are the Avengers?

Marvel shook up the team’s origins when it decided the super-group was ready for its big screen close-up, but here goes. Unlike “The X-Men,” they’re not social pariahs on the wrong side of the law, and unlike “The Fantastic Four,” they’re not a family. They’re government sponsored and government approved. In the movie version, the team is backed by an espionage group know as S.H.I.E.L.D. and its eye-patch-wearing chief Nick Fury (Samuel L. Jackson). The membership consists of Captain America (Chris Evans), a World War II-era soldier; the Hulk (Mark Ruffalo), an ornery creature with super strength; Thor (Chris Hemsworth), the god of thunder; Iron Man (Robert Downey Jr.), a rich, acerbic guy in killer armor; Hawkeye (Jeremy Renner), a supremely talented archer; and Black Widow (Scarlett Johansson), a Russian spy whose main talent is her disappearing, reappearing accent. In the comic books, a group consisting of Thor, Hulk, Iron Man, the Ant-Man and the Wasp first united to defeat Thor’s brother Loki. On the big screen, the villain remains the Norse god of mischief, but the two insect-inspired do-gooders have been jettisoned.

What the Heck is a Tesseract?

Stumble into “The Avengers” cold, and you’re bound to spend a good deal of the film scratching your head and muttering, “What in the name of Odin’s beard is a tesseract?” Allow us to elucidate. The cube is a stunningly powerful object that the U.S. government has in its possession when the film opens and that Loki wants. Frequently referred to in the comics as the cosmic cube, the tesseract gives its owner nearly unlimited power and the ability to open portals between galaxies… which is pretty handy if, like Loki, you’re plotting an alien invasion. The cube hails from Asgard and previously made cameo appearances in “Iron Man 2” and “Thor,” and factored rather prominently in “Captain America.” In that film, Captain America’s arch-nemesis, the Red Skull, captured the cube and attempted to harness its powers to create a weapon. Things didn’t go according to plan, and Red Skull was vaporized while trying to wield the cube. So it’s clearly, buyer beware. Hey That’s Not Eric Bana… or Edward Norton?

There’s a reason that Mark Ruffalo dubbed Hulk “our generation’s Hamlet.” Every 30-plus-year-old actor seems destined to get a crack at bringing their version of the big green guy to the silver screen. In “The Avengers,” Ruffalo becomes the third actor in less than a decade to play Dr. Bruce Banner and his monster alter-ego. Bana played the part in 2003’s “Hulk,” and Norton took over the role in 2008’s “The Incredible Hulk.” Bana left because barely anyone could stomach Ang Lee’s ponderous take on the comic book character or his movie’s bizarre starfish motif, while Norton reportedly feuded with Marvel over the movie’s script and final edit. Enter Ruffalo, who plays a far less tortured, much more shaggy and Ruffalo-licious Banner. This time, the good doctor has learned to better control the inner anger that unleashes the Hulk, but Loki has a way of getting under even the most zen-like person’s skin. Wait, There’s an Alien Invasion?

The Avengers don’t just have to best Loki to save the world, they also have to prevent a horde of extraterrestrials from overrunning Manhattan. The brothers from another planet in this case are a race of alien creatures known as the Chitauri. In the comic books, these creatures are shape-shifters who once aided the Nazis in their quest for global domination. On the big screen, however, they mostly keep their skeletal, fish-eyed form. Although they are technically pulling the strings when it comes to Loki, they have the movie bad guy problem of having really bad aim, while proving to be really easy targets. As outer space menaces go, they’re only marginally more threatening than E.T. Will Spider-Man or Wolverine Pop Up in Future “Avengers” Sequels? Not likely. Although both characters find themselves at various points in the Marvel mythology as members of the team, neither Spidey nor Wolvey will be suiting up with the gang in the near future. The culprit isn’t a lack of big-screen success. The original Spider-Man films grossed nearly $2.5 billion worldwide, and the character is swinging back into theaters this summer in “The Amazing Spider-Man,” albeit with Andrew Garfield taking over the wall-crawler role from Tobey Maguire.

Likewise, Wolverine has played a key role in making the X-Men franchise a hit and starred in his own blockbuster spin-off, “X-Men Origins: Wolverine.” But the rights to these characters are tied up with other studios. Before Marvel was acquired by Disney for $4 billion in 2009 it licensed the rights to many of its most popular characters to other film companies. To that end, Fox controls the X-Men characters and Sony houses Spider-Man as long as they keep making sequels or reboots to the hit films. Barring a miracle, it’s going to be a long time before Iron Man, Spider-Man and Wolverine save the world together. – Yahoonews