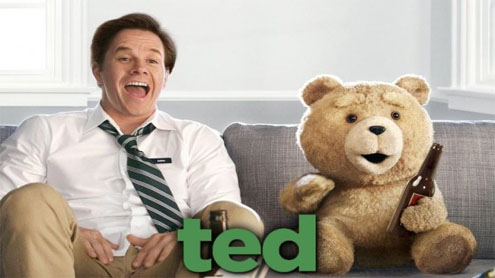 Ted took the number one spot in this weekend’s U.S. box office battle.

The R-rated movie starring Mark Wahlberg and Mila Kunis brought in an impressive $54.1 million over the three-day weekend.It exceeded predictions and is now the highest domestic opening for an original R-rated comedy – a title which was previously held by The Hangover’s 2009 debut with $45 million.

Raunchy stripper movie Magic Mike didn’t disappoint in its second place offering as it brought in a respectable $39 million.Disney Pixar’s Brave came in third but grossed over $34 million its second week in theatres.Tyler Perry’s Madea’s Witness Protection also over-performed with $26.3 million landing in fourth place despite only being in 2,161 screens.

Madagascar 3: Europe’s Most Wanted came in fifth with $11.8 million in its fourth week out.Abraham Lincoln: Vampire Hunter fell down to the sixth spot with $6 million. Prometheus dropped to seventh with $4.9 million.Meanwhile Moonrise Kingdom went back up to number eight with $4.8 million and Snow White and the Huntsman was ninth with $4.4 million in takings.However, family comedy People Like Us starring Elizabeth Banks and Michelle Pfeiffer failed to find an audience and only scraped in $4.3 million in its opening weekend landing in tenth place.  – MSN