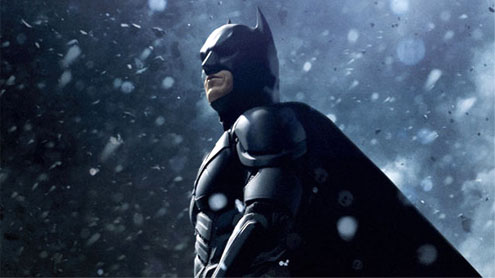 Part prologue, part teaser, at the beginning of “The Dark Knight Rises” we meet our antagonist, Bane. We don’t see him right away.

Instead, he’s one of two men with burlap sacks over their heads, purportedly captured by the CIA and whisked away on an airplane in an effort to discover the location of, well, Bane. Before his face is revealed, we hear Bane’s voice — a mix of Darth Vader and Peter O’Toole in “My Favorite Year.” Also on the plane is Dr. Leonid Pavel, a nuclear physicist on whom Bane has been trying to get his hands. You know this isn’t going to end well for him.

What transpires next is a mind-blowing aerial hijack so incredible, you almost believe that writer/director Christopher Nolan and company are out of their minds to give us something this good at the start of the movie, because there’s simply no way the rest of “The Dark Night Rises” can match this moment. Then again, Christopher Nolan is both confident, and a genius.

Back in Gotham, eight years after the death of former Gotham DA Harvey Dent, whom the world believes was killed by Batman (see “The Dark Knight”), a troubled Commissioner Gordon finds himself at the rebuilt Wayne Manor for a fundraiser, where he’s written a voluminous speech spilling the beans about what really transpired between Harvey “Two-Face” Dent and the Batman. However, he thinks better of it and instead continues to extol the virtues of The Harvey Dent Act, which has helped take a few thousand bad guys off the streets.

Also during those eight years, Batman has disappeared and Bruce Wayne has become the ultimate recluse, spending his time holed up in his spacious mansion, rarely leaving it.This is when we meet Anne Hathaway’s fetching Selina Kyle, aka Catwoman. She poses as a maid to gain access to Bruce’s bedroom where she not only meets our hobbled hero but exchanges witty banter, steals his mother’s pearls from his encrypted safe, kicks his cane out from his hand, beats him up, escapes out the window and kidnaps a congressman. Guess who’s intrigued?

Selina’s bold and cunning cat burglary is enough to loosen the foundation in the fortress Bruce has built around his heart since the death of his beloved Rachel Dawes and Batman’s symbolic death. And really, who can blame him. Nolan is a stickler for getting the aesthetic right and Hathaway doesn’t just fit the aesthetic, she’s practically her own aesthetic. It’s hard to take your eyes off of her.

Then we meet Officer John Blake, played by Joseph Gordon-Levitt. An orphan like Bruce Wayne, Blake has secretly known Batman’s true identity. When Bane attacks the stock market and the city, Blake pays Wayne a visit in what turns out to be one of the best scenes in the movie. Gordon-Levitt is every bit the actor Christian Bale is and seeing him and Bale go toe-to-toe is thrilling, if you’re into that great acting sort of thing.

Enough with the setups and superficial spoilers. Time now to turn our attention to the quality of this film by presenting you with several hyperbolic adjectives that begin with the letter “E.” Exhilarating. Epic. Extraordinary. Here’s another one: Euphoric. As in the action is exhilarating, the scope is epic, the visuals are extraordinary and when the film is over, you’ll feel euphoric.

Bale nails Bruce Wayne and Batman but just like in “The Dark Knight,” the bad guy steals the show. Tom Hardy is terrifying as Bane, a menacing, heartless monster who finds killing as easy as breathing. On the flip side, Michael Caine takes the character of Alfred and turns him into the movie’s emotional core, saving his best performance in this series for last, while Gary Oldman as Commissioner Gordon also is, as always, excellent.