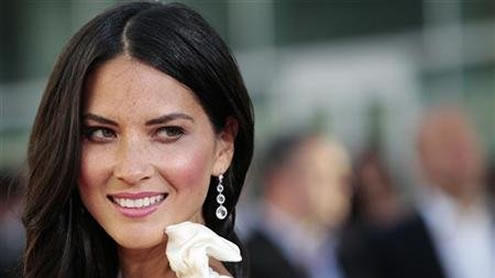 LOS ANGELES: After nearly a decade of slowly and steadily rising in Hollywood, Olivia Munn is finding success on big and small screens with the HBO television drama “The Newsroom” and director Steven Soderbergh’s movie “Magic Mike.”

If working with two high-profile Oscar winners in Soderbergh and “Newsroom” creator Aaron Sorkin was not enough, Munn is now taking her first leading role in the independent film comedy “The Babymakers,” which hits U.S. theaters on Friday. A former host of TV network G4 and correspondent on Comedy Central’s “The Daily Show,” Munn portrays the wife of a man who cannot make her pregnant, so he gathers his friends to break into a sperm bank to steal the deposit he left years ago. “What I loved about the movie is the dynamic of this couple,” Munn, 32, told Reuters. “They’re in the early years of their marriage; they feel like they have time. Everything (on the reproductive side) seemed to be working before, but now there’s this problem.”

“Babymakers” is directed by Jay Chandrasekhar, who also appears in the film. Munn first met the director when he was a guest on her G4 program “Attack of the Show!” and she won a beer-chugging contest. A friendship was born. On G4, which focuses on video game news and entertainment, Munn won fans for being funny, sexy and game savvy. It also caught the attention of Jon Stewart, who signed her to be a correspondent on his Emmy Award-winning comedy “The Daily Show,” which Munn says marked a turning point in her life. “It put me on a different level,” said Munn. “I was the first female on the show in seven years and the first correspondent in five years. When you change up something that people watch every day, they are going to take notice.”

One of those who noticed was “Daily Show” fan Sorkin.  “The Newsroom” is not Munn’s first stab at the news or being part of an ensemble cast on television. The Oklahoma-born, Tokyo-raised Munn majored in journalism in college and worked for a time as a sports reporter. She guest starred on numerous TV shows before being cast in 2011 NBC series, “Perfect Couples.” The program, about three couples in various stages of their lives, was canceled before the season ended, although Munn doesn’t quite see it that way. “I prefer to think that it wasn’t canceled, but that it turned in to a mini-series because that doesn’t sound as sad,” said Munn. She has been on a roll since then. Male stripper movie “Magic Mike,” in which she portrays a lover of the lead character, has been one of Hollywood’s surprise hits, taking in $107 million in U.S. theaters so far.

“The Newsroom,” in which Munn portrays financial analyst Sloan Sabbith, rode a wave of advance media hype ahead of its premiere and, despite mixed reviews, has been renewed for a second season on cable TV network HBO. Sorkin is known for writing fast dialogue that makes points in films like “The Social Network,” or TV shows such as “The West Wing,” but Munn said she has had no trouble keeping up with the pace.  “I speak very fast normally,” she said. “My Asian mother is always telling me to slow down. The biggest challenge is doing justice to Sorkin’s dialogue. It has a melody to it, and Sloan has a different cadence than I do … The challenge is learning the character so well that it becomes second nature.”Munn called this a “very exciting” time in a career that has finally come together after years of hard work. And although she may not know what roles the future holds, she is certain of one thing: “I don’t want this to be temporary.”-Yahoonews