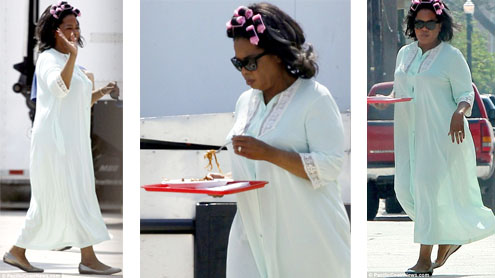 Multi millionaire media mogul Oprah Winfrey proved she really is a high roller as she stepped out on set on Monday.

The star, 58, was spotted with pink curlers in her hair while in New Orleans to film The Butler.She was dressed light green nightgown – which turned sheer under the harsh sunlight – and comfortable gold flat shoes.Winfrey was taking a break between scenes and seen tucking into her carb-heavy meal as she headed back to her trailer. The Butler is Winfrey’s first acting role since she appeared in 1998 civil war movie Beloved.

The film is based on the real life story of White House butler Eugene Allen (Forest Whitaker), a man who worked through eight presidencies, ending with Ronald Reagan in the  1980s, with Winfrey playing his wife. Winfrey has been sharing her multitude of costume changes and different looks with her Twitter followers.The iconic TV star has also been seen on set looking like a glitzed up grandmother, complete with greying hair and a sparkling top.

Director Lee Daniels has been impressed with Winfrey’s portrayal of a character who has been described as ‘sassy but vulnerable.’ ‘She’s a monster, man!’ he told The Huffington Post.’She’s bringing it and I’m really proud of her. It’s crazy when you’re working with her because people are obsessed.”I got to make sure there are no phones around.’

The director added,’but we’re having a good time and I think that she’s able to escape the pressures of being Oprah while on my set, because she’s able to sort of be the character.”Which is really nice to witness. I wrote this film for her.’The Butler boasts an impressive all-star cast.It includes John Cusack as Richard Nixon, Robin Williams as Dwight Eisenhower,  Liev Schreiber as Lyndon B. Johnson and James Marsden  and Minka Kelly as John and Jackie Kennedy. – Dailymail