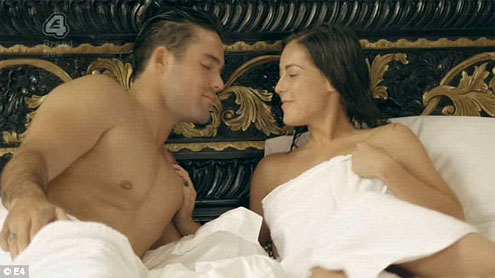 Made In Chelsea sank to new depths on Monday night as it incorporated a steamy shower scene into the opening sequences.

Fans of the show were left open-mouthed as the programme opened with Spencer Matthews and Louise Thompson sharing a hot shower.With the couple apparently doing more than just scrubbing each others backs, they finally emerged from the bathroom with towels on.The 30 seconds of steamy passion was too much for many viewers and it wasn’t long before they vented their disgust.

After their watery liaison Spencer tried to convince Louise to spend the morning with him in bed, but she declined and awkwardly had to come clean about why she had to leave.She told him that his love rival Andy had invited her out for coffee.While Spencer remained calm he did sternly let her know that he wasn’t happy about her rendezvous.He told her: ‘I do find it slightly weird that he just keeps turning up, but if you wanna have coffee with him, have coffee with him. ‘If Andy says anything weird let me know and if I need to have another word with him let me know.’Louise and Andy enjoyed a leisurely trip to the bookstore together as friends but things turned nasty later in the episode.Spencer organised a boys night out for the all of the lads and strangely invited nemesis Andy along too.After downing several shots of alcohol things came to a head between Spencer and Andy after some banter went too far.Andy made a quip about how he would love to see Louise when she was drunk and Spencer retorted: ‘If she hooked up with you she’d have to be loose’.

With an awkward silence falling amongst the group Spencer pulled Andy to one side to speak about the situation.Spencer said: ‘What’s the Louise deal? Do you or do you not have feelings for my girlfriend? Just back the fuck off my girlfriend.’Andy stood his ground and admitted: ‘I do have feelings for your girlfriend.’A riled and angry Spencer then fired back: ‘I’m finding it hard not to slap you right now.’ – Dailymail