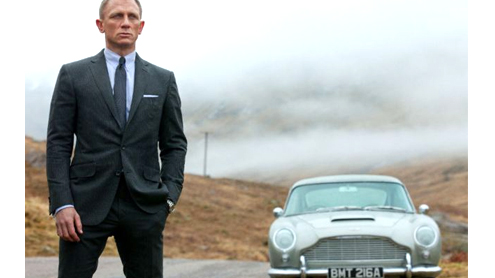 As 007 he had a licence to kill, but it was only recently that James Bond star Daniel Craig got his licence to drive.

Craig passed his U.S. driving test on Staten Island just a month before the opening of the latest James Bond instalment Skyfall in October, the most successful 007 film of all time.Passing on his first attempt, Craig decided to get his American driving licence because he spends much of his time living in New York with wife Rachel Weisz.The only concession for the British star was that officials allowed him to take the classroom test on his own for fear his presence would be put off other licence hopefuls.

A spokesman for the Professional Driving School of America in New York said: ‘His assistant requested a special class for Daniel himself. No other students were there.

‘He was such a nice dude, so friendly.’The driving licence has a photo ID and is used as the primary form of identification in the U.S.All non-U.S. citizens are required to complete a written test, a five-hour safety course and the short driving test before qualifying for a licence.Craig’s classroom work would have included watching videos and lectures on how to execute correct turns, driving in extreme weather and also the dangers of drink-driving.His licence will be valid for 10 years. – Dailymail