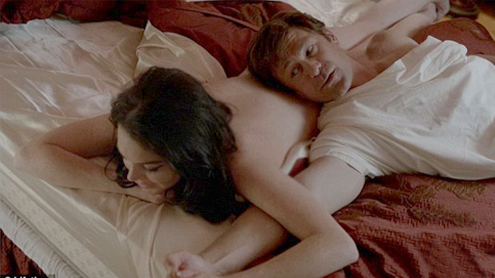 Viewers hoping to see Lindsay Lohan bare some flesh during steamy on-screen sex scenes in Liz & Dick had just a naked back to contend with.

The troubled actress, who last year posed for Playboy, was coy in front of the cameras during her comeback role portraying Hollywood icon Elizabeth Taylor during her two decade love affair with Richard Burton.Despite spending plenty of airtime in the throws of passion, Lohan, 26, remained firmly beneath the sheets, presumably to keep TV broadcast regulators happy with the prime time slot.But the audience were treated to a shot of Lindsay’s bare back as she lay on a bed after one love scene.

The TV movie, which spans their two decade, famously on-off affair, begins on the last day of Richard Burton’s life as he lay dying of a brain haemorrhage on August 5th 1984 aged just 58.The couple narrate their story from a darkened film set as the great actor’s mind drifts back to the first time he spotted Taylor one summer at a Hollywood pool party. He admits to being instantly smitten.The pair next meet in Rome on the set of Cleopatra while Taylor was married to Eddie Fisher and Burton to his first wife Sybil Williams, the mother of his two sons.

But things do not start well and the co-stars are at each other’s throats – Taylor mocks his classical training while Burton calls her rude and  dumpy.Burton’s love of the booze is seen early on as he turns up on set with a terrible hangover and fumbling his lines which leads to the first of many furious spats.’A love scene? With him?” shouts Taylor to an assistant. ‘A love scene? With her?” Burton played by Grant Bowler says to his assistant.The duo sit on a bed moments before filming is due to start and Burton struggles to get into character asking for a moment before cameras start running. He turns to Taylor who appears disinterested and begs her to help him get into the role.’Now I have to act that I am in love with you and that you are in love with me and that is not easy. Help me. Please.’With that, the pair begin to kiss to the embarrassment of the crew and a director who interrupts asking Burton to finish reading his lines first.Already whispers are circulating on set about ladies’ man Burton and his fiery co-star.

From that moment of their first kiss, they do little to hide their desire for one another.Paparazzi catch them out together on the town in Rome which causes headaches for studio bosses trying to avert the scandal of an affair.As both their marriages dissolve, Burton forces Taylor to chose between her lover and her husband in a room full of people including Eddie.He demands to know: ‘Who do you love Eddie or me?’

Taylor answers ‘You. I love you.’She runs outside in tears and chased by her mother who says: ‘If I’m not mistaken you have just ended your fourth marriage. ‘That might be a record for a 29 year-old.’Taylor responds: ‘What am I to do? I love the man.’But a blissful summer together ends abruptly when Burton’s scorned wife attempts suicide and he rushes to her side.Devastated, Taylor knocks back pills with a bottle of vodka when he tells her their relationship must end for the sake of his two young sons.

However, back on set for the final scene of Cleopatra he tells his former mistress: “My heart is broken and you have the smashed pieces.’Taylor travels to Switzerland to get over her heartbreak but Burton tracks her down and sends the first of a lifetime of letters.And it isn’t long before they fall for each other again and conspire another film collaboration in The V.I.P.s, ousting Sophia Loren as the female lead.Once more the Welshman is torn between his wife and his lover leading to furious on-set and off-set rows with both drinking heavily.

‘It’s 8am and they are already drinking,’ remarks a member of the production crew.Snubbed by London society because of their adultery, chased by paparazzi and criticised in the press, they head to New York.But the animosity follows them there and under pressure – and after a divorce from Fisher and Williams – they marry for the first time.Burton has stage success on Broadway but an Oscar evades him.Nominated seven times throughout his glittering career, he fails to win an Academy Award which causes friction when Taylor receives her second.They win their next joint film roles when they are introduced to a movie executive producing Who’s Afraid of Virginia Woolf. To prove they can fight on demand they ad-lib a row.Taylor says: ‘Why would anyone hire a vomiting vat of vodka like you?’Burton replies: ‘At least when I vomit, I make mellifluous sounds unlike your little mouse-crap squeaks.’After the success of the film, they head on vacation to Mexico where their business manager flies in to tell them they are broke thanks to their lavish lifestyle.In a bid to save money and escape the press they move onto a yacht in the Mediterranean.Despite their financial woes, Burton continues to shower his wife with the expensive jewelery she loves and even buys her a $1 million private jet.

Meanwhile, the boozing continues.’I’ve ordered breakfast,’ Taylor announces before two bloody marys are  brought out to the deck.As she reaches her fortieth birthday the actress begins to fear her career is on the skids and tragedy strikes when Richard loses his beloved brother Ifor.Six months later on the set of Blue Beard, Burton’s drinking gets out of control and marks the beginning of the end of their marriage.

They divorce in haste after 10 years in 1974.But less than a year later he proposes for a second time at her hospital bed after she suffers a cancer scare.The union was over in months and both go on to marry others – never forgetting their incredible bond.Burton continued to write to Taylor till the end. Years later on news of Burton’s death, Elizabeth collapses in shock.She kept his love letters until the day she died. ‘I know he really loved me,’ she says. – Dailymail