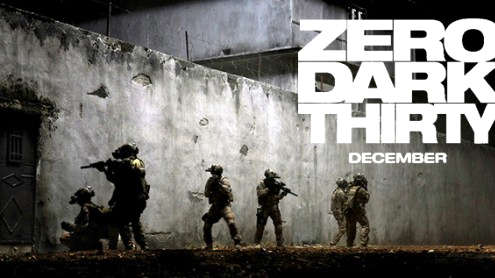 The makers of a Hollywood movie about the US operation to kill Osama bin Laden denied asking for classified material for their film, but say they did conduct interviews with a CIA officer and others at the heart of the decade-long hunt for the Al Qaeda leader.

‘It was all based on first-hand accounts so it really felt very vivid and very vital and very, very immediate and visceral of course which is very exciting as a filmmaker,’ Kathryn Bigelow, director of ‘Zero Dark Thirty,’ told ABC News in an interview airing on Monday.Bigelow and screenwriter Mark Boal said in a ‘Nightline’ interview that they were originally working on a film about the failed bid to find bin Laden in the Tora Bora mountains of Afghanistan during the U.S-led invasion there in 2001.

But their plans changed swiftly after US President Barack Obama announced in May 2011 that a Navy commando unit had killed bin Laden in a compound in Pakistan.‘I picked up the phone and started calling sources and asking them what they knew and taking referrals and knocking on doors and really approached it as comprehensively as I could,’ Boal told ‘Nightline’ according to an advance excerpt.‘I certainly did a lot of homework, but I never asked for classified material,’ he said. ‘To my knowledge I never received any.’

The release of ‘Zero Dark Thirty’ – seen as a strong contender for Oscar nominations – was pushed back to December after the film got caught up earlier this year in a US election year controversy.The US admiral who oversaw the secret operation in May denied a claim that the Obama administration arranged for Bigelow and Boal to be given special access to top officials while researching their movie.The film reconstructs the hunt for bin Laden largely through the eyes of a young female CIA officer, played by Jessica Chastain, who helps find him through a long-forgotten courier. Obama only makes a fleeting appearance in the film.

‘It was a couple of months into the research when I heard about a woman, part of the team, and she has played a big role and she had gone to Jalalabad and been deployed with the SEALs on the night of the raid,’ Boal told ABC News reporter Martha Raddatz in the ‘Nightline’ interview.While some of the dialogue is word for word and based on interviews with the young CIA officer and others, some of the dialogue is dramatized, said the Oscar-winning makers of 2008’s ‘The Hurt Locker,’ about a US Army bomb disposal team during the Iraq War.

The assault on bin Laden’s Pakistan compound was recreated as accurately as possible, using a full-scale version built in Jordan. The floor, the tile, the carpet, the furniture and the marks on the walls were copied from images seen in ABC News footage that Bigelow said they reviewed frame by frame.The full interview can be seen on ‘Nightline’ on Monday evening.‘Zero Dark Thirty’ opens in US movie theaters on Dec. 19. Nominations for the 2013 Academy Awards are announced on Jan. 10 ahead of the Feb. 24 Oscar ceremony. – Khaleejnews