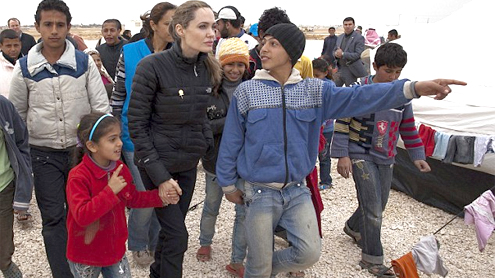 It has taken seven years and six children, but Brad Pitt and Angelina Jolie are finally about to walk down the aisle.

Hollywood’s biggest couple could be married any day now after the pair reportedly picked up their wedding rings.In Touch magazine is reporting that Brad, 48, and Jolie, 37, are gearing up to walk down the aisle sending their stylist pick up wedding rings.’On November 27, a stylist for the actress picked up wedding rings from Neil Lane jewelers for the couple,’ the magazine reports.

The bands arrived at the Jolie Pitt home just a day after Brad made it clear at the premiere of his new film, Killing Me Softly, that he planned to make an honest woman out of Angie – at the request of their children.’I am getting more pressure from my kids, and it is something I want to do within their lifetime, but I also feel like the time has come,’ the actor said at the New York premiere.

‘The time is nigh. It’s soon. I got a good feeling about it.’According to People magazine The World War Z star said the fact they have been together for so long does not lessen the importance of a wedding.’We’ve had a family, we’ve raised the kids,’ he said.’I am surprised how much it meant to me once you had that.’The couple have six children three whom they adopted – Maddox, 11, Pax, 8, Zahara, 7, – and three biological children – Shiloh, 6, and 4-year-old twins Knox and Vivienne.

The pair’s wedding has often been speculated over with many believing they were set to marry in August this year.It was thought the pair were to tie the knot in a civil ceremony at their recently renovated multimillion dollar French estate, Chateau Miraval.Both halves of Brangelina are no strangers to walking down the aisle.Angelina has been married twice before – to British actor Jonny Lee Miller between 1996 and 1999 and then Billy Bob Thornton, from 2000 to 2003.The actress even had the Monster’s Ball actor Billy Bob’s name tattooed on her shoulder blade but later had it removed.

The unusual couple remain good friends, however.Brad was of course married to Jennifer Aniston in what was regarded by many as a fairy tale romance.The couple’s marriage lasted five years before they announced they were divorcing in early 2005 – which came after he had met Angelina on the set of Mr & Mrs Smith.Brad and Angelina had previously declared they would not wed until same-sex marriage was officially recognised.

However, their children had other ideas.’It seems to mean more and more to our kids,’ he said in January.’We made this declaration some time ago that we weren’t going to [get married] till everyone can. But I don’t think we’ll be able to hold out … it means something to me, too, to make that kind of commitment.’But while she may be about to wed, it seems Angelia is no bridezilla.

Rather than picking out flowers, on Thursday she was busy meeting with Syrian refugees at the Za’atri refugee camp in Jordan.Jolie said on her second visit to the region in three months: ‘Civilians inside the country are being targeted. Many of those trying to flee are exposed to extreme danger right up to the border itself.’I appeal to all sides in the conflict to do all they can to ensure the safe passage of these innocent civilians.’Since her last visit to the region in September, the number of refugees in the region has increased by more than 200,000 and in Jordan alone by nearly 50,000. – Dailymail

Chancellor announces £77million fighting fund to crack down on companies