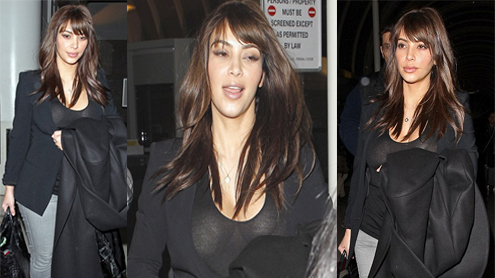 Kim Kardashian unveiled a new fringe as she arrived at LAX on Tuesday – but now she has admitted she was just faking it.

The reality TV star, 32, took to her blog to set the record straight on Wednesday after sending fans and photographers into a frenzy with her hair transformation.In a message titled ‘The Truth About The Bangs’, she wrote: ‘The bangs are fake! Just clip ons!She continued: ‘I had a fun Cosmo cover shoot yesterday and Chris McMillan clipped these on!’Kim had earlier posted a montage of her make-over on her Instagram account which showed her in the process of getting her hair styled.

She carried her black winter coat in one hand and her high shine crocodile skin handbag in the other.Once she touched down in California, she tweeted: ‘There’s no place like home! I’m soooo tied!’Finally a day off tomorrow! Can’t wait to sleep in, in my very own bed!’It’s not the first time Kim has worn a fake fringe – she wore clip-ons to a New Year’s Eve party last year. – Dailymail