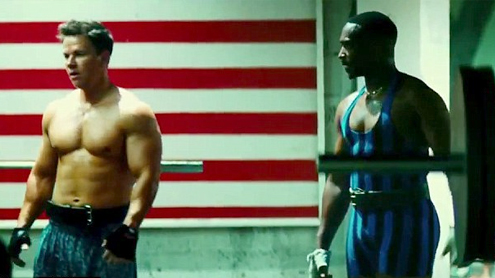 Mark Wahlberg rarely needs an excuse to show off his ripped physique.And he takes full advantage of his rock hard body in the upcoming Michael Bay film, Pain and Gain, which is due out in theaters on April 26, 2013.

The 41-year-old actor and Dwayne ‘The Rock’ Johnson star in the film as a pair of bodybuilders in Florida that get caught up kidnapping and extortion scheme that all goes terribly wrong.The movie, which is based on a true story and magazine articles by Pete Collins, also features a killer cast with the likes of Ed Harris, Anthony Mackie, Tony Shalhoub, Ken Jeong and Australian funny girl Rebel Wilson.The trailer for the 1990’s-set action comedy, which was released on Wednesday, spends very few seconds not showing off Wahlberg’s perfect bod.

It opens with the former Funky Bunch front man doing some extreme pull-ups on the side of a building before an epic chase with police officers.Marky Mark plays fitness freak Daniel Lugo who gets fed up with his life as a gym rat and enlists fellow lifting enthusiasts played by Johnson and Mackie to help in a big money scheme.Lugo is the manager of a gym with a storied criminal past who arrives in Florida in the summer of 1994 to clean up his act.

But he starts trading in on his massive muscles and gets cracking on a plan to steal from business owner and playboy Marc Schiller.The boys are unfortunately incompetent at their murderous plot and instead play up the humour, at one point throwing Shalhoub’s character into the back of a shag carpeted van while wearing ninja costumes.The film reportedly cost $25million, making it the lowest budget film by Michael Bay since his 1995 feature film debut Bad Boys.

But it still shows off the Transformer director’s true style: stunning cinematography, lots of action, and plenty of hot girls — including a shot of Wahlberg getting showered with confetti as he gets a special dance from a stripper.The Boogie Nights actor has been making bank at the box office recently, from the high-grossing adult comedy Ted to last year’s Oscar-nominated film The Fighter, and even serves as the executive producer for the hit 1920s gangster HBO series Boardwalk Empire.

Wahlberg’s great successes are certainly a million miles away from the wild man the father-of-four was in his youth.The former drug addict claims to have been in trouble with the law an astonishing 20 to 25 times, including being charged with attempted murder and serving two years in a  Correction House jail.However he is now a staunch Catholic who attends mass every day and attempts to be an all round good father to his four children with model Rhea Durham.Mark also stars in and produced the film Broken City featuring Russell Crowe and Catherine Zeta-Jones, due out in January. – Dailymail