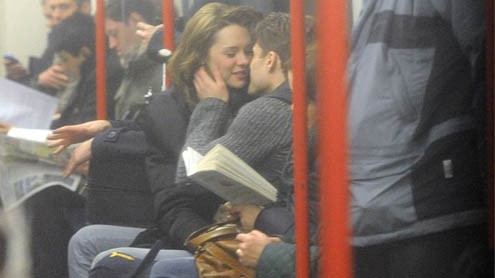 Married ex Emmerdale actor Ben Freeman has been having an affair with his West End co-star Gina Beck, it has been claimed.

Brazen Ben, who has a 15-month-old son, was spotted kissing and hugging his lover, 31, on a packed train just last week – apparently not caring who saw them.Theatre sources said the pair have been lovers since January and have enjoyed sneaking around behind the back of Ben’s wife, former Hollyoaks actress Jennifer Biddall, after meeting on West End show Wicked three months ago.Insiders added the rest of the cast are uncomfortable with their relationship, which the pair have made obvious at rehearsals.

It isn’t the first time Ben has become embroiled in a scandal – he hit the headlines in 2008 when he faced trial for raping a 16-year-old girl in Barbados. He was later acquitted.A source told The Daily Star: ‘It is no surprise they were caught. This has all been behind Jennifer’s back, she had no idea.’There were no signs of the marriage in trouble. They were blissfully happy and everyone thought they were the real deal and would last forever. The marriage definitely was not over.’

Ben, who plays Prince Fiyero, only started on the show this year after beginning rehearsals in Pctober.The source added: ‘Gina puts herself out there as this squeaky-clean actress, so this news coming out will not do her any good. She was engaged to someone up until very recently.’Former heartthrob Ben met wife Jennifer on the set of Dreamcoats and Petticoats, she agreed to marry him two years after he was acquitted of the rape charge.

He was accused in 2006 of raping a girl, from Cheshire, on a sun lounger on the tropical island.Ben repeatedly denied rape and claimed the sex had been consensual – he was acquitted of the charge.After Ben’s son was born he did a shoot with his wife Jennifer for OK! magazine and even had a husband and wife column in Mother and Baby magazine.MailOnline has contacted Ben and Gina for a comment.  – DailyMail