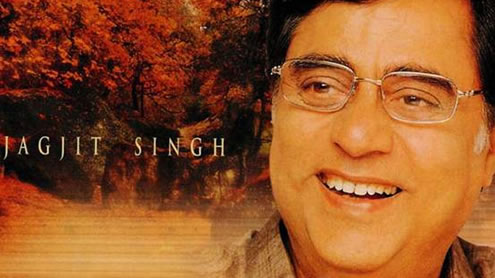 Well known singers like Lata Mangeshkar and Asha Bhosle Monday mourned the death of one of their own – renowned ghazal singer Jagjit Singh who passed away at a hospital after suffering a brain haemorrhage at the age of 70, leaving a vacuum in the world of music.

“I am in shock after hearing about Jagjitji’s death. It is such a big loss, an end of an era. He was one artist who never needed films to get popular. He was an instant hit,” said singing legend Lata Mangeshkar.”I can’t imagine the days when I will no longer be able to hear his silken voice, no longer be able to talk to him or listen to his new songs. Now his old ghazals is all we have.His soothing voice, his warmhearted nature are all gone now. He was the pride of India. I also feel bad for his wife Chitra, she is all alone now,” said Asha Bhosle.

An upset Usha Uthup added that she could not even begin to describe her sadness.”I can’t even begin to tell you how sad I am. It is a horrible feeling. I have known him for 42 years of my singing career. What a wonderful human being he was. I cannot forget his insistence on using some musical instruments that no one else did. It is such a loss. Love you Jagjit,” Uthup said in a choked voice.Ghazal singer Pankaj Udhas said he was “shattered and devastated”. “I didn’t want to hear this news. I was hanging on a thin tread of hope that Jagjitji will remain with us. His style was incomparable. He revolutionised the entire approach of this form of singing and gave a new dimension to non-film music.”

Breathing his last at 8 a.m. Monday, Singh was admitted to Mumbai’s Lilavati Hospital on Sep 23 after he suffered brain haemorrhage. He is survived by his wife Chitra Singh.Kashmiri fans mourn Jagjit Singh’s death.As the voice that enthralled thousands of ghazal fans fell silent Monday, people in Jammu and Kashmir remembered Jagjit Singh as someone with a “rare gift” and one who took the ghazal out of the literary idiom and presented it to the masses.The ghazal king died in Mumbai after a brain haemorrhage. He was 70.Shabir Ahmad, an Urdu teacher, said: “Jagjit Singh kept the tradition of ghazal singing alive in India after Begum Akhtar. While Begum Akhtar sang for the connoisseurs among ghazal lovers, Jagjit took the ghazal out of the literary idiom and made it common place.”

Mehraj-ud-Din, 34, a fruit vendor in Residency Road area of Srinagar city, concurred.”I understand Urdu but not the finer points of ghazal singing. However, never once have I felt he isn’t singing for me when I hear him. I am deeply shocked at his death,” Mehraj-ud-Din said.Farooq Nazki, a renowned Kashmiri poet and critic, said: “It is a great loss to Indian light classical music. But I am sure his rendering of Urdu ghazals will be remembered forever.””There are only three big names who have sung Ghalib and helped him reach the masses. These are K.L. Sehgal, Talat Mehmood and Jagjit Singh,” he said.

“His voice was as soft as velvet. He never resorted to a high pitch and never played any classical acrobatics. Yet, in his simplest rendering of the Urdu ghazal, Jagjit excelled. He definitely stands second only to Mehdi Hassan in the sub-continent in ghazal singing.”Jagjit Singh visited the Kashmir Valley many times for concerts. He last sang for his admirers this June in the auditorium of the Kashmir University.”Once he started with his famous ghazal ‘Woh Kagaz Ki Kisti, Woh Barish Ka Pani’, everybody in the auditorium was swinging with the poet. He was a phenomenon nobody could resist,” said Fayaz Ahmad, 24, a student who attended the concert.

Abid, 42, who drove 80 km from north Kashmir’s Sonamarg hill station to be part of the concert, said: “Once you heard him, it hardly mattered whether you understood the nuances of ghazal singing or not. He would deliver his words straight into your heart.”Jagjit Singh would always joke during his concerts to make his audience more participative. This has now become a trend in Urdu ghazal singing in South Asia.”One did not have to be a scholar to understand a ghazal once Jagjit sang it. He had the divine gift of carrying every type of audience with him.This was proved when he sang in London and other places outside India,” said Habibullah Dar, 65, a retired school teacher.

“Only some of his western audiences would understand the words, but everybody would be with him. That is a rare gift and it will be decades before we have anyone like him,” said Habibullah. – santabanta

US Breaks Up Major Terror Plot by Iran

US Breaks Up Major Terror Plot by Iran