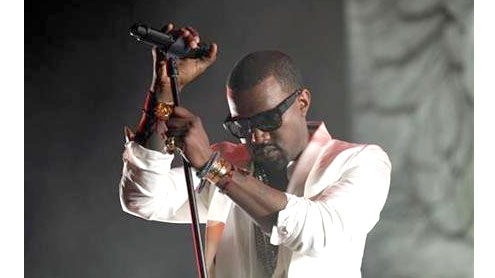 LOS ANGELES: Rapper Kanye West led the field of Grammy contenders on Wednesday with seven nominations, including for his album “My Beautiful Dark Twisted Fantasy” and his joint venture with Jay-Z “Watch The Throne”.

But British singer Adele — whose album “21” is the biggest-selling of 2011 — and R&B artist Bruno Mars were close behind with six apiece, including nods for the three big awards of album, song and record of the year.Other leading contenders for the major music industry awards show include U.S. alternative rock band Foo Fighters, also with six nominations, while rapper Lil Wayne and newcomer Skrillex had five nominations apiece.The nominations for the top awards were announced during a televised concert in Los Angeles featuring performances by Lady Gaga, Usher and up-and-coming country singers The Band Perry.

Winners in all 78 categories will be announced at the Grammy Awards ceremony and show on February 12.Traditional rock bands were largely missing from the leading categories, with hip-hop artists and female singers including Lady Gaga, Rihanna and Katy Perry grabbing the spotlight.The best new artist category produced a particularly eclectic mix of female rapper Nicki Minaj, hip-hop artist J. Cole, country sensations The Band Perry, house and electropop performer Skrillex and American folk band Bon Iver.The seven Grammy nods for West crowned a critical and commercial comeback for the controversial 34 year-old rapper who took a self-imposed hiatus from performing in 2009.

West recorded his best rap album contender “My Beautiful Dark Twisted Fantasy” in Hawaii after removing himself from the mainstream U.S. music scene following harsh criticism over his 2009 outburst involving country starlet Taylor Swift at the MTV Video Music Awards.West, already a 14 time Grammy winner, was also nominated for song of the year for “All of the Lights” and best rap performance with Jay-Z for “Otis”.Mars, 26, won three of his nominations on the back of his hit song “Grenade” off his debut album “Doo-Waps & Hooligans”.”It feels incredible right now,” Mars told reporters.

“I’m so glad the album is being recognized in this way.” “This awards stuff, I’m still trying to get used to it. It’s hard for me as Adele and Kanye West are incredible, so the fact that the album was nominated in same category is amazing,” Mars said.Adele’s six nominations mark the culminations of a momentous year for the 23 year-old singer, who won a Grammy for best new artist in 2009.

The sultry soul singer was recognized both for her album “21”, which has sold more than 12 million copies worldwide, as well as her two smash singles “Rolling in the Deep” and “Someone Like You.”But the London-born singer is currently recovering from surgery on her vocal cords in November after suffering repeated voice problems and cancellations during her U.S. tour this year. It is not known whether she will have recovered in time to sing at the Grammy Awards in February. – Yahoonews

Strong winds down trees and power lines in West