No Doubt to release first album in a decade in September 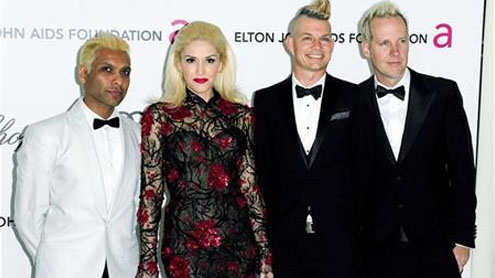 LOS ANGELES:  California pop-rock band No Doubt will be making their long-anticipated return to music this September with a new album on September 25, the band said on their website over the weekend.

The group, formed of lead singer Gwen Stefani, guitarist Tom Dumont, bassist Tony Kanal and drummer Adrian Young, will be release their first record in more than a decade following 2001’s “Rock Steady.”There is no title yet, but No Doubt did reveal a handful of tracks on which they’d been working in a June 2011 interview with Rolling Stone magazine, including the “party-ready reggae blast” track “Steady Down” and ska-pop tune “One More Summer.”

The quartet from Anaheim, California, formed in 1986 and rose to fame in 1992 with their hit single “Don’t Speak,” helping lead the ska revival of the 1990s, a musical genre originating from Caribbean dance music in Jamaica in the 1950s.The band took a hiatus in 2004, pursuing solo projects, before reuniting for a greatest hits tour in the summer of 2009 and hitting the road for more than 50 concerts across the U.S. and Canada, supported by acts including Katy Perry.

Lead singer Stefani also gained success as a solo artist with hits such as “Hollaback Girl” from her 2004 album “Love. Angel. Music. Baby” and “Wind It Up” from her second album “The Sweet Escape” in 2006, as well as launching a fashion career with her own clothing label. – Yahoonews