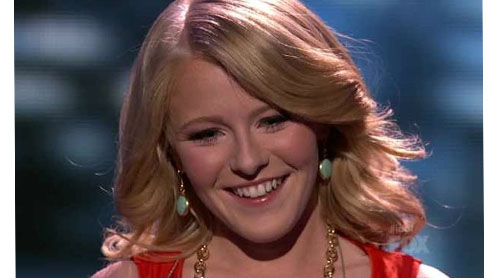 Cavanagh closed out the show by performing Miley Cyrus’ “The Climb,” remaining composed while fellow contestant Joshua Ledet wept as she sang.Almost 70 million votes were cast to determine Thursday’s outcome. Audience voting was based on performances on Wednesday night’s episode during which contestants sang songs by artists from California, followed by songs they wished they had written.Cavanagh first belted out “Faithfully” by rock band Journey, and the show’s judges marveled that she was hitting her stride. Panelist Randy Jackson said her rendition “did him proud.”

The judges, however, were less enthusiastic about her second selection, Bonnie Raitt’s “I Can’t Make You Love Me.” Jackson called it “the wrong choice at the wrong time.” Jennifer Lopez told her there was “a little too much vibrato,” and mentor Jimmy Iovine was the most blunt, saying Cavanagh “crashed and burned.”At 18-years-old, Cavanagh’s failure was chalked up to her lack of real-life experience with heartbreak that was needed to infuse the song with proper emotion.

On Thursday’s elimination episode, Lopez rose from the judges’ table to perform her new song “Dance Again.” Season 7 winner David Cook also stopped by to serenade audiences with his “The Last Song I’ll Write for You.””Idol”, which first aired in on Fox in 2002, has launched the careers of singers Kelly Clarkson, Adam Lambert, and Jennifer Husdon, among many others. Now in its 11th season, the show continues to be the most watched reality show in America.

Audiences vote for their favorite performers by phone and text message each week as contestants are challenged by a variety of musical styles. The winner receives a recording contract following the final episode later this month. – Yahoonews