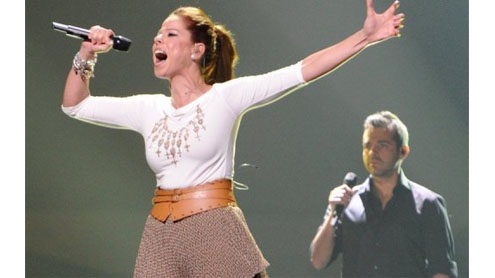 Spain’s Eurovision contestant has admitted the country would struggle to host the event if it were to win.

Directors from broadcasters TVE joked to Pastora Soler, who will represent them this year, “Please, don’t win!””If we won, I think it would be impossible to stage the next edition because it costs so much money,” she told ABC Punto Radio.Thursday saw 10 more countries named finalists in the second semi-final to be held ahead of Saturday’s main event.Swedish entrant Loreen, considered by some to be the favourite this year, was among the successful acts to go through.

Lithuania, Malta, Norway and Turkey were among the other nations to join the 26 finalists.The evening saw eight countries eliminated from the competition, among them Bulgaria, Croatia, Portugal and the Netherlands.Pastora Soler will sing her ballad Quedate Conmigo (Stay With Me) at Saturday’s final, to be held in the Azerbaijan capital of Baku.It is written in the contest rules that the public broadcaster of the nation that wins must host the following year.

“I think it is not the moment, neither for Spain nor for Spanish public, to win Eurovision,” Soler was quoted as saying by the AFP news agency.The Spanish government has slashed spending in public television, resulting in the cancellation of several popular programmes.Spain last won the competition in 1969, when it shared a four-way tie with the UK, the Netherlands and France.Spain also won the contest in 1968, 12 years after it started, with singer Massiel’s song La La La. – BBC