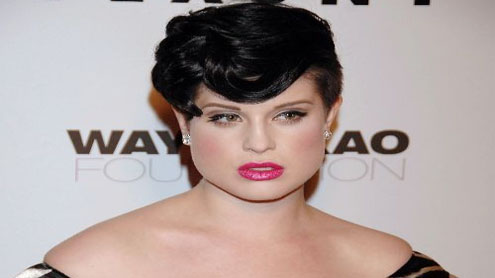 Kelly Osbourne has waded into a Twitter spat about Lady Gaga.The TV star is known for being open about her opinions and has fought back after a fan of the outrageous singer accused her of being rude about Gaga.

The incident began when a social networker user called HausofBrianna accused Kelly of being ‘hypocritical’, which astounded Kelly.’obviously no one loves you so I will! Stop being so hateful your better then that! At least I hope you are (sic)!’ Kelly replied.’I’m not hateful! Just like you I am allowed my own opinion! It’s ok if you don’t agree just don’t be mean (sic)!’

After the user slammed Kelly for being rude about people’s outfit choices on her TV show Fashion Police, it then transpired she was actually annoyed about an alleged slight Kelly had made about Gaga.When Kelly insisted she had never been rude about the flamboyant star, the Twitter user quickly wrote: ‘You called her disrespectful for not walking the red carpet at the Grammys…and she was mourning the death of Whitney Houston.’

Kelly explained her comments had been taken out of context, revealing she actually stated that ‘anyone’ who didn’t walk the carpet was being disrespectful. She slammed the Gaga fan for only hearing what she wanted to in order to start a fight.’please grow up! 1 day you will look back on this and understand how stupid this is (sic)!’ Kelly added.

Although the star appeared to be putting an end to the dramatic interchange, several other Gaga fans were unhappy with her comments. Some Twitter users claimed she should have shown her ‘maturity’ by not responding to the initial comments, with others suggesting she should be more forgiving of people’s opinions.Kelly’s fans then came out in force to back her up, stating she should be allowed to defend herself and handled the situation with grace. – MSN